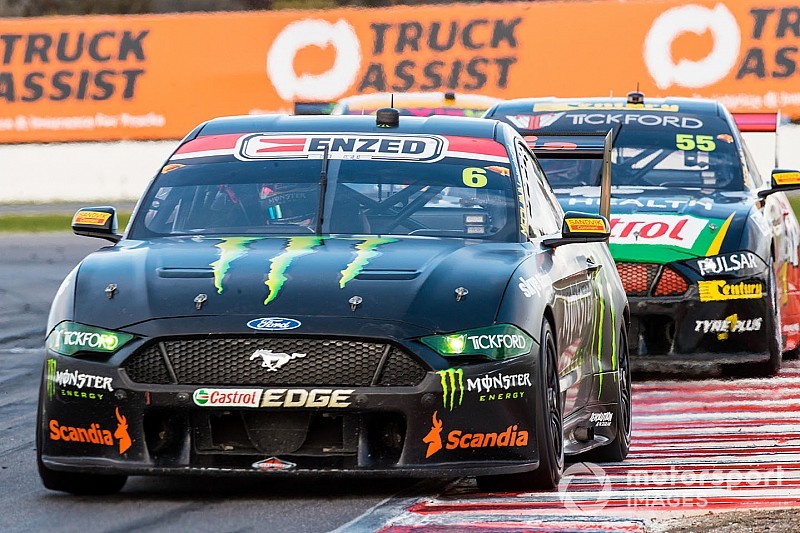 Engine upgrades are in Tickford Racing's "development pipeline" for its Supercars Mustangs, with updates expected to filter through as soon as the upcoming Darwin round.

The team has enjoyed an upswing in form since the introduction of the Mustang, the season so far including a win and four other podiums for Chaz Mostert, and four podiums for Cam Waters.

As it stands three of the four Tickford cars are in the Top 10 in the points, with Lee Holdsworth – who has struggled to get qualifying pace out of the Mustang – not far behind in 12th.

But there's still a pace deficit to the dominant Penske Mustangs, particularly runaway points leader Scott Mclaughlin, who bagged his ninth and 10th wins of the season at Winton late last month.

There's an ongoing effort to bridge that gap in speed, however, with team boss Tim Edwards explaining that new parts are on their way.

"We’re not sitting with what we’ve got at the moment," said Edwards.

"We’ve got a reasonable development pipeline, and we’re working hard to bring that in over the next few months."

When asked if that development was focussed on engine, Edwards added: "It’s a part of it, but it’s not the only thing. We’ve got a few areas that we’re targeting in the car. We've sort of got a roll-out plan over the next few months."

That ongoing development is why Tickford hasn't used any of its individual test days so far this year, the team opting not to mirror other Melbourne-based teams and run in the lead-up to the Winton round.

"We’re testing in about two months time. We decided not to test before this race because we wanted to wait until we actually had some new bits to test," added Edwards.

"If we came [to Winton] when the other teams came here a couple of weeks ago, we really just would have been testing for the sake of it. Ultimately you arrive, and the grip level is completely different week-on-week.

"You got to be careful you don’t come testing, and we’ve done it in the past, you lull yourself into a false sense of security because it does change so much with the ambient and the different rubber that goes down."