Supercars engines to drop 15 horsepower in 2020 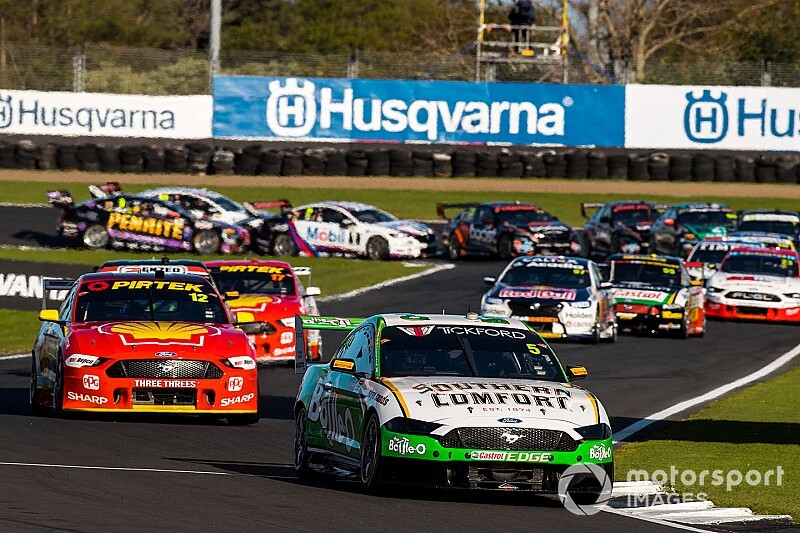 The V8 engines used in Supercars will produce approximately 15 horsepower less in 2020 amid cost-saving measures set to save teams as much as $50,000.

The category is looking to make good on a promise to improve mileage of the 600-plus horsepower units, with a plan in place to cut down on one rebuild per season per car.

At the heart of the cost-saving measures is a mandated rocker and piston ring package, which will replace the costly, volatile parts currently being used for a small performance gain.

The loss is expected to be around 15 of the current 650-odd horsepower.

"At the start of the year we were asked to look at how we can save the teams some money," said Supercars' head of motorsport Adrian Burgess.

"So we started the engine investigation and looking at that.

"There wasn't a single team doing under four rebuilds, in terms of its engine's life, and it was a sort of easy objective for us to try and get that down to three.

"Bring that down to three and you potentially save each team $40-50,000, just on engines. The components of a rebuild are $30-35,000, and then add in some labor as well. [The saving] would be different for different people.

"[The teams] all migrated to a really expensive ring package that gave them two horsepower. But it actually degraded a lot quicker.

"We're not inventing the wheel again or anything. We are going back to an older ring package for everybody.

"It's $390 as opposed to $2000 a set. And it doesn't degrade. So it's really a no-brainer for everybody, and a very effective way for us to take some stress out of the engines and allow them to stretch them a little bit further than they are."

Burgess added that discussion around engine durability are already paying dividends in pitlane, even before the older-spec components are re-introduced.

"Last year, when we looked at our engine logs, there were only two engines during the course of the year that went over 4000 kilometres," he said.

"This year already we've seen nine. So, even just the discussion and the work we've been doing, teams are starting to think differently.

"It's a mentality shift. They're starting to change their process. Already they're seeing the benefits of that. And next year it will be all in place, where you can only rebuild three times during the year."

Burgess said a change to the Accumulated Engine Power limit should stop teams from trying to claw back the lost grunt in other areas.

"We'll lower the peak number down to the equivalent to what we've all lost," he said.

"Clearly we don't want to encourage more R&D, and more development. So that then goes hand-in-hand."

Drive by wire has been a big talking point this year, with Supercars evaluating and testing the technology as part of its 2020 development.

The category has decided not to make it mandatory for 2020, but will continue its testing programme.

"We don't feel we need to mandate it. But it's something that the category wants to work on," he said.

"It'll be a very useful tool for us to be able to use."

The technology will continue to be optional for teams, who can decide individually whether to invest in the switch.

"You've got to understand the benefits of running it," said Burgess.

"The way you can run into your limiter will be different from a normal cable throttle, so the stress that you can save your drivetrain, transmission, all of that, will be something that they will factor in, whether they choose to run it or not.

"You'll get various different costs from different engine builders on how easy it is to implement in their engine. Some engine builders, it's very quick and easy, because parts of the engine have already been designed to accept it, should they choose to.

"But other engines aren't designed that way, so there'll be different cost implications, depending on who you talk to."