Erebus Motorsport on early accident in 3rd practice at Bathurst 1000

Slade clipped the wall at turn three, damaged his steering and hit the wall heavily at turn four with the right front corner of the car.

The #47 Heavy Haulage Australia E63 AMG Erebus Mercedes of Tim Slade was involved in an accident in the early laps of today’s third practice session for this weekend’s Supercheap Auto Bathurst 1000 at Mt Panorama.

Slade clipped the wall at turn three, damaged his steering and hit the wall heavily at turn four with the right front corner of the car.

The front end of the car has been completely stripped and a full evaluation of damage will not be completed for at least another four hours.

At that point a decision will be made whether the car of Slade and Andrew Thompson will continue in the event, or will be withdrawn. 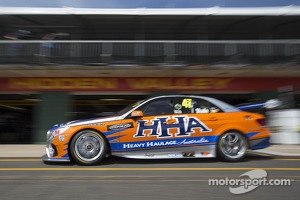 “The entire Erebus Motorsport crew has been climbing over the car and working feverously to try and get a true estimate of the damage,” said Maddison.

“There are still several processes we have to go through until we can make a decision on whether we will have a car that can be fixed in time to be safe and competitive. Obviously, one of the things we are mindful of is that his car also has to be at the Armor All Gold Coast 600 in 10 days time.

“We have been inundated by well wishes from fans and you can be assured we will be doing everything in our power to have three Erebus entries on the grid on Sunday.

“Tim [Slade] is obviously shattered at this situation, but we are thankful that he has come away unharmed despite such an impact. We want nothing more than for him and Andrew [Thompson] to be out there competing on behalf of Erebus Motorsport on Sunday.”


“What do you say? I just feel bad for my crew and everyone who has worked so hard at Erebus,” said Slade, who is back in the garage assisting his crew.

“I was a little wide at turn three the lap before and obviously too shallow the next. I clipped the wall, damaged the steering and then hit the wall at four.

“I am a little sore in the shoulders with the belts and stuff, but that’s about it.

“Unfortunately we now have a waiting game and hopefully we can make the grid.”