Two of the three V8 Supercar races at Winton are in the books, and they were far from being monotonous.

The seventh and eighth rounds of the 2014 V8 Supercar season took place at the famous Winton road course yesterday and it was certainly a spectacle worth watching. It was a hectic day that saw a lot of carnage, chaos, controversy, and even a little history being made.

Race seven was the "Fabian Coulthard Show," with the pole-sitter leading from start to finish, but everything that happened in-between was pure madness. After Scott McLaughlin's race went up in smoke halfway through the event, the safety car was deployed and the intensity level suddenly ratcheted up a few notches.

The restart was more of a demolition derby than anything else with two multi-car incidents, prompting another safety car intervention. Mostert, Slade, and Courtney were all caught up in the first wreck with Mark Winterbottom earning a few battle scars on his way through as well. At the other end of the circuit, Percat lost control, speared the door of Reynolds' machine and the pair went spinning into the gravel. A third caution quickly followed when Todd Kelly stopped on track. 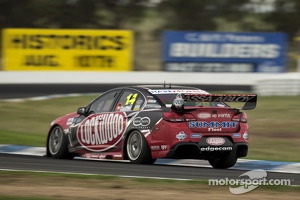 When we finally got back into a rhythm, Russell Ingall asserted himself as the main story. On fresher tires, he aggressively cut his way through the pack, working his way into a podium position and looking for more. As he zoned in on 2nd place Shane Van Gisbergen however, he was issued a black flag for an earlier incident. On his charge to the front, he got into David Wall who spun, and consequently collected James Moffat. Ingall emerged from the collision unscathed; or so he had thought.

After the penalty, fan favorite Ingall only managed a 10th place finish and was seriously fired up when he found a microphone. He unleashed on the race stewards and proceeded to call them dopey idiots, morons, peanuts who live in an ivory tower, and that he'd like to drag the officials out to pit lane and throw them to the fans. And that's just a quick summary of his heated soundbite!

Fabian Coulthard and Shane Van Gisbergen topped the podium, but Dale Wood was the real story in 3rd; the first podium of a career that reaches all the way back to 2008. The rest of the top ten was made up of Bright, Holdsworth, Davison, Winterbottom, Lowndes, Whincup, and Ingall.

Race eight was much tamer than its predecessor, but just as riveting. Scott McLaughlin, who had endured mechanical problems in the previous race, was ready for redemption and led much of the early portion of the race. He was plagued by issues once again though, forcing him to give up the lead and multiple laps.

With McLaughlin out of the picture, Fabian Coulthard took over as the man everyone was chasing. One of them, Lee Holdsworth, was edging closer and closer as the laps ticked away. With just three laps to play, Lee made his move and forced his way past the slower Holden. As he drove off with the win, Mark Winterbottom managed to take 2nd but failed to reach the Mercedes in time.

It was the maiden V8 Supercar victory for Erebus Motorsport and Mercedes. For Lee, it's his first trip to the top of the podium since 2010. It was a horrid day for legends Craig Lowndes and Jamie Whincup, who started towards the back and only managed to move up to 16th and 19th.

Coulthard is just 19 points back of Lowndes now; with Whincup 77 markers back in 3rd. The complete top ten from race eight was Holdsworth, Winterbottom, Coulthard, Reynolds, Wall, Moffatt, Bright, Davison, Courtney, and Mostert.