Fast Facts for this weekend's Bathurst 1000

Nissan returns, Craig Lowndes to rack up important milestones, first time for Mercedes-Benz to line up on the Bathurst 1000 grid - these and other fast facts inside.

Stopping the domination of Triple Eight Race Engineering and the Holden Racing Team is imperative for any team that wants to win the 2013 Supercheap Auto Bathurst 1000.

The two Holden squads have between them claimed an amazing 10 of the last 12 wins in the October classic - five each.

Not counting the Kmart team (which was related to HRT at the time of its wins by sharing a common equipment supplier in Holden Motor Sport), the last Bathurst win to be claimed outside of Triple Eight and Walkinshaw Racing/HRT/HMS was 2000 when Garth Tander and Jason Bargwanna won the race for Garry Rogers Motorsport.

While HRT and Triple Eight have dominated Mount Panorama, Ford Performance Racing is yet to deliver on the grand stage that is Bathurst.

Despite starting on the front row for six of the last seven Supercheap Auto Bathurst 1000s - including three pole positions - the team has not been able to score a single podium finish, let alone a victory.

The last podium finish by an FPR car at Bathurst came in 2004 when Craig Lowndes and Glenn Seton finished second.

David Reynolds and Dean Canto's runner-up result in last year's race came in an FPR-prepared Falcon, though run under the Rod Nash Racing REC (Racing Entitlements Contract), which is considered a separate entity to FPR in championship record books.

Craig Lowndes will rack up a few important milestones at Mount Panorama this year.


The five-time Bathurst winner will start his 20th Supercheap Auto Bathurst 1000 as well as his 500th ATCC/V8 Supercars Championship race.

Lowndes has an amazing recent record at Bathurst, finishing on the podium eight times in the last 10 years, including four victories.

One more podium finish this year will tie him with Peter Brock, Larry Perkins and Jim Richards for the record of most podiums in the history of the Bathurst classic - 12.

Nissan makes a return to the Supercheap Auto Bathurst 1000 in 2013 for the first time in 15 years with its four-car squad of new Altimas.

The last time a Nissan competed in the endurance classic was the 1998 AMP Bathurst 1000 run for two-litre Super Tourers - Steve Richards and Brit Matt Neal finished second in a Primera.

However, it is 21 years since Nissan last competed in both the Australian Touring Car Championship (now V8 Supercars Championship) and Bathurst with the mighty GT-R.

This year marks the first time since 1994 that a Mercedes-Benz will line up on the grid for the Supercheap Auto Bathurst 1000.


On that occasion, Jamie Miller and Peter McKay drove a 190E to 25th outright and sixth in the two-litre class.

However, the best result by a Mercedes-Benz in the history of the race remains ninth outright (and second in class) in 1986 by the late Denny Hulme and 1976 Olympic gold medal-winning downhill skier Franz Klammer.

Just seven Mercedes-Benzes have lined up on the grid in the history of the Bathurst endurance classic since 1963 - the three 2013 AMG E63 racers from Erebus Motorsport V8 follow in their footsteps as non-factory backed entries.

Harry Firth and Bob Jane drove a Mercedes 220SE to victory in the 1961 Armstrong 500 at Phillip Island before the race was moved to Bathurst in 1963. 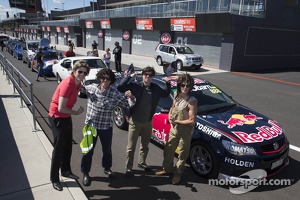 Holden is aiming for its 30th Bathurst victory this year and has one of its four-time race winners - Greg Murphy - making his first start with the Holden Racing Team at Mount Panorama in 15 years.

Murphy drove for the team in four Bathurst classics between 1995 and 1998, claiming victory in 1996 alongside Craig Lowndes.

The Kiwi will team up with James Courtney in the #22 Commodore, making for a combined 28 starts in the race between them.

Only the combinations of Craig Lowndes/Warren Luff (32) and Mark Winterbottom/Steve Richards (30) have more Supercheap Auto Bathurst 1000 starts between them in this year's field.

Supercheap Auto Racing's endurance signing Ryan Briscoe will join a very exclusive club when he lines up alongside Russell Ingall in the #66 Commodore at Bathurst.

He'll become just the fourth driver in history - and first in 20 years - to have competed in the Indianapolis 500, Le Mans 24 Hour and Supercheap Auto Bathurst 1000 in the same year.

The last driver to achieve the feat was Geoff Brabham in 1993 - the year he won the Le Mans 24 Hour for Peugeot.

Australian Vern Schuppan (1976 and 1981) and American John Andretti (1988) are the only others to have achieved the rare feat.

Six drivers are making their Supercheap Auto Bathurst 1000 debut this year - one more than last year - with four overseas drivers among this year's rookie crop.

Ekstrom is the first Swede to compete in the race since Rickard Rydell drove for Triple Eight Race Engineering back in 2003.

Bleekemolen is the only one to have competed previously at Bathurst. Last October he was a guest driver in the Porsche Carrera Cup round and finished second earlier in the year in a Mercedes-Benz AMG SLS GT3 at the Bathurst 12 Hour.

The local rookies are both Dick Johnson Racing drivers - Chaz Mostert and Ash Walsh. Both pilots have competed in the Dunlop Series previously at Bathurst.

The level of intensity continues to rise year-to-year in the Supercheap Auto Bathurst 1000 with no less than 19 cars finishing on the lead lap in the last three years straight at Mount Panorama. The previous record was 13, set in both 2007 and 2009.

A total of 13 drivers will perform 'double duty' at the Supercheap Auto Bathurst 1000, completing in both the main race and one of the many support categories.