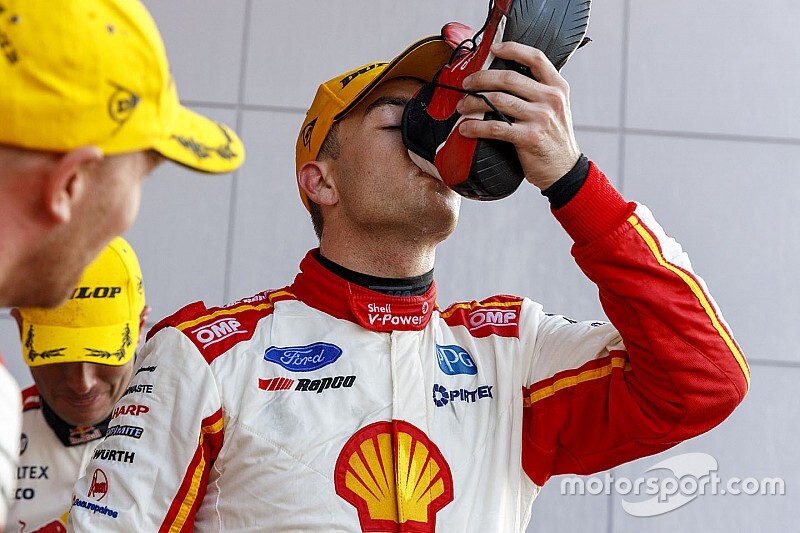 Scott McLaughlin says it was "full commitment" over the top of Mount Panorama as he held off Shane van Gisbergen for a first Bathurst 1000 win.

The DJR Team Penske driver faced a single-lap dash to finish the 2019 Great Race, the thrilling finale coming courtesy of a late Safety Car when Andre Heimgartner hit the wall at Forests Elbow.

To add to the drama he had Shane van Gisbergen right under his rear wing, and was also battling lower-than-ideal tyre pressures.

Reflecting on the lap that sealed his victory, McLaughlin says it was "full commitment", despite the question marks over grip.

"For me it was all about that I had one lap to do, I still had work to do," he said.

"I'd tried to save as much fuel as I could so I could flat out, and that ended up with me having basically no tyre pressure. So the first two corners was a bit skatey. But then over the top was just full commitment.

"It was probably one of the coolest laps to be honest, low fuel and low tyre grip and really sliding it around."

The late Safety Car was a mixed blessing for McLaughlin, putting him in van Gisbergen's firing line on one hand, but easing his own fuel concerns on the other.

Still, he reckons he could have made the finish on fuel even without the caution.

"It sounds we would have. I was only doing the numbers that my engineer Richard [Harris] was telling me," he said.

"I trust their judgment more than anyone's so I just did what I was told.

"I knew that this was big and that we had to save some fuel, and I'm so glad we got it done."

Team co-owner Roger Penske was on hand to see the breakthrough win, paying tribute to McLaughlin as someone capable of lifting the entire team.

"We saw the teams that were so successful here and I think it was a journey for us, and it wasn't going to happen overnight.

"Scotty, we saw him running the Volvo and we knew if we could possibly get him on our team it would make a big difference. And we've grown together.

"The one thing I have to say is that he's kind of got the momentum within the team and lifted it. He lifts the whole place. And I think that lifts him to the next level.

"I said it many times this weekend, he reminds me a lot of [Rick] Mears. He could always dig deeper and get it for us."

McLaughlin's win is technically still pending a hearing into a team orders charge levelled at DJRTP for an instruction issued to Fabian Coulthard behind the Safety Car.

However any possible sanction is highly likely to be limited to a fine or a teams' points penalty, meaning McLaughlin's victory isn't under threat.

Tickford won't stop Mostert and Waters racing each other