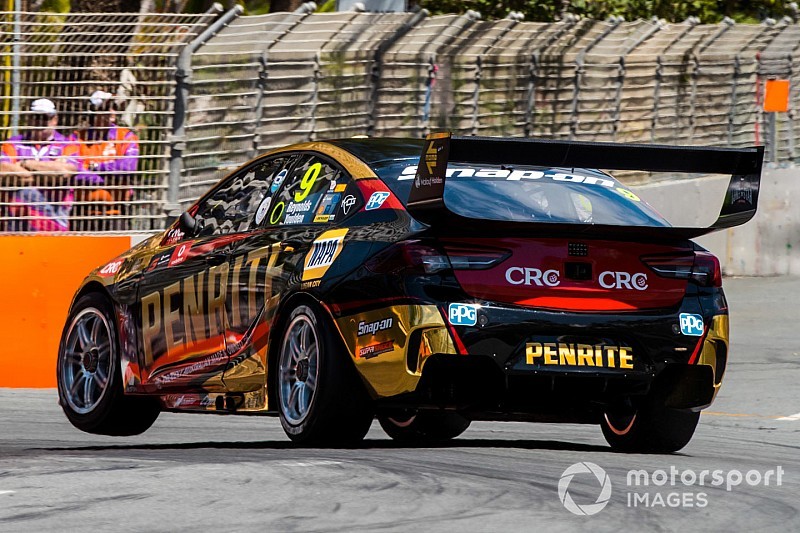 David Reynolds made a seven-spot gain in the Top 10 Shootout to secure pole on the Gold Coast, while points leader Scott McLaughlin had his time wiped for a kerb strike.

Reynolds was just eighth quickest in regular qualifying, but a clean 1m10.697s lap on good rubber helped him charge up the leaderboard.

His cause was further helped by the likes of McLaughlin and Jamie Whincup both using too much kerb on their laps and having their times disqualified, provisional polesitter Shane van Gisbergen then playing it safe on his lap to help Reynolds take his third pole from the Season of Endurance.

“I was pretty nervous, we might have got a bit lucky there with a few kerb strikes,” he said.

“But I put a good lap together, I was 90 per cent through Turn 1 and did a good job for the rest of the lap.

“The car in qualifying wasn’t the best, but we went back to the set-up we had yesterday and it transformed the car.”

Yesterday's race winner finished up second despite running on older tyres, followed by van Gisbergen, who admitted he went conservative after hearing title rival McLaughlin had been hit with a kerb strike.

“On the way out they said Scott and Jamie had a kerb hop and [engineer Grant McPherson] has a way with words, when he spoke it was simply just ‘don’t stuff up'.

“So I under-drove like hell, I think we were the last car through the chicane, I just made sure I stayed within the lines and just did an average lap.

“It sucks, I wanted to go hard, but I put on a safe one and we’re in the hunt and that’s good.

“The sensors are the same for everyone, but you just don’t where they are.”

Lowndes was fourth, followed by Walkinshaw pair Scott Pye and James Courtney who reversed their order compared to regular qualifying.

Cam Waters was seventh, followed by the trio of drivers who were disqualified – McLaughlin, Whincup, and Tim Slade.

“It was a mistake on my part. I wasn’t as hungry there yesterday and I tried a bit more and obviously overstepped the mark,” said McLaughlin.

“It’s disappointing because the car felt really good, but that’s good for the race.”