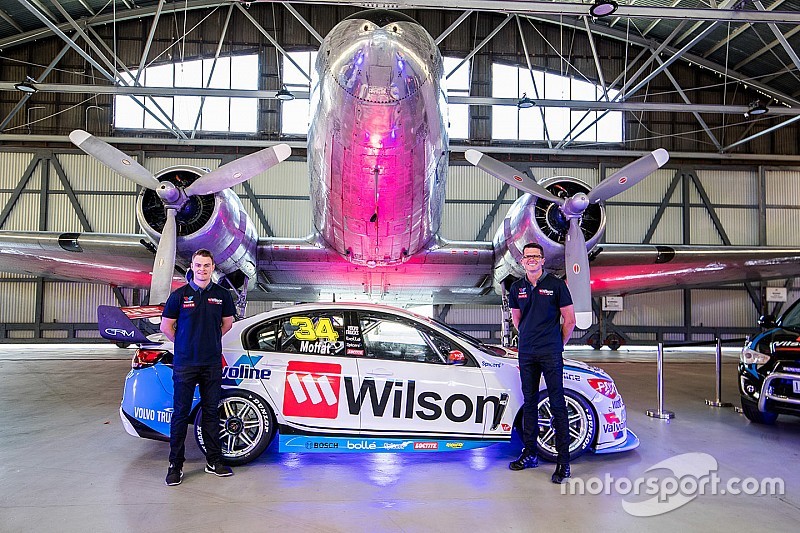 Garry Rogers Motorsport has revealed its livery for the 2017 Supercars season, and named James Golding and Richard Muscat as endurance co-drivers.

The team switches back to Holden hardware for the 2017 season, undergoing a last minute Commodore build after an agreement over the use of engines couldn’t be reached with outgoing manufacturer Volvo.

GRM also welcomes Garth Tander back to its fold, the former Holden Racing Team driver joining the team that he won Bathurst with back in 2000.

Today the covers came off the two brand new Holden’s, with Wilson Security continuing as the squad’s major backer.

The team also confirmed that young gun James Golding will partner Tander at Sandown, Bathurst, and on the Gold Coast, while Super2 driver Richard Muscat will drive alongside Moffat at the long-distance races.

It was also confirmed that there are plans for Golding to make Wildcard starts this year, as he won’t be running a full Super2 programme.

“James ‘Bieber’ Golding will join Garth for the Endurance Cup and we also plan to take advantage of the wildcard opportunities and run Bieber in a couple of the Supercars sprint rounds throughout the season,” confirmed Garry Rogers.

“Bieber is in his final year of his mechanics apprenticeship with us and finished fourth in the Dunlop Series last season. I certainly see similarities between Bieber and Garth in his younger years. I am sure that if he keeps his eyes and ears open Bieber will learn a lot from Garth throughout the season.

“Joining James [Moffat] for the Endurance Cup will be Richard Muscat. Richard competed in the 2016 Dunlop Series following a season in Carrera Cup and also previous racing in the Australian GT Championship.

“I was particularly impressed with Richard’s performance in his first season driving a Supercar and his ability to adapt to these cars and his ‘no fuss’ approach sees him fit in really well with our team.

“Richard is extremely committed and after concreting with the family business rushes into the workshop to see how he can help the team.

“I am really pleased that Richard has developed to such a level that I believe he will be an extremely valuable endurance driver.”