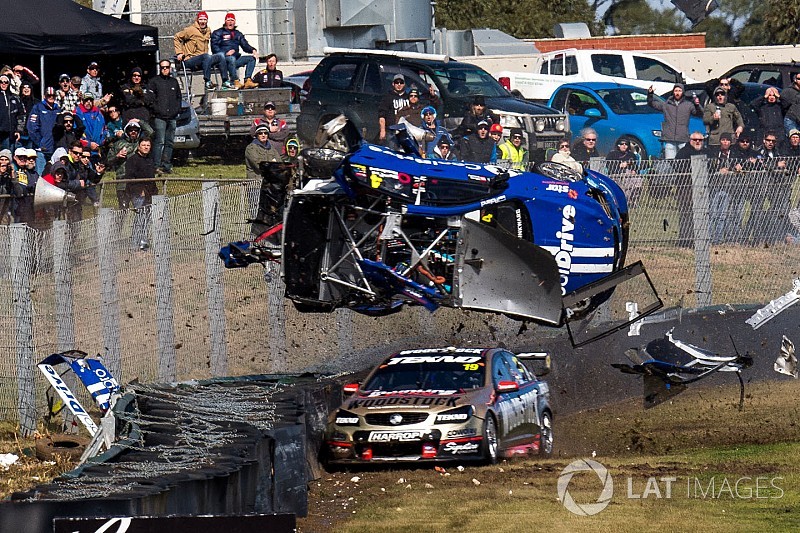 Todd Hazelwood says he’ll try and avoid detailed analysis of his hair-raising Sandown shunt until the end of the race weekend, to help concentrate on today’s Super2 race.

The Super2 front-runner was involved in a frightening shunt during yesterday’s co-driver qualifying race for the Sandown 500, his Brad Jones Racing Commodore pitched into a high-speed spin by Jono Webb as the pair scrapped over position through the Dandenong Road complex.

Hazelwood’s car was sent into a violent airborne spin, the side and roof panels peeled from the chassis.

Remarkably, Hazelwood emerged muddy but unharmed from the wreckage.

While the crash spelt the end of his main game duties for the weekend, Hazelwood is still in action this weekend as he desperately tries to keep his Super2 title tilt on track. That meant he was back in a Supercar less than an hour after the horror crash, finishing third in the first of two races.

The key to getting back on the horse, he says, is not dwelling on replays of the crash – at least not until today’s Super2 action is over.

“I haven’t seen the race replay yet… I don’t really want to, just based on the fact of knowing what it felt like in the car,” he said.

“I felt how much air I got. I know it will be pretty spectacular but from a driver’s perspective there are some things that you just don’t want to look at until the end of the weekend.”

Despite a bullish attitude towards getting back in the Super2 car for yesterday’s race, Hazelwood admitted that deep down it wasn’t easy putting the crash out of his mind.

“It was probably only when I walked back to the car and started getting ready that it all came down on me. It was a bit overwhelming, just the fact of how many people were actually there wanting to support us, and asking if I’m okay. That was probably more overwhelming that anything.

“There was a couple of times going across the back straight… in Super2 we’re not going any slower, we’re still approaching that corner on the limiter and going as fast as it possibly can in top gear, so it’s a big commitment corner. I was under Safety Car in that race and you could see all the debris and stuff that I knew was from our incident.

“It’s a tough thing to try and put aside, but it’s all part of doing the job.”

Hazelwood added that his focus will now turn to making amends at Bathurst, joking that he’ll also try and enjoy a little bit of the fame that comes from such a spectacular shunt.

“I think someone said before there was more than 200,000 views on the video in an hour and a half,” he said.

“Look, you’ve got to take the positives out of it, and that’s certainly one of them!