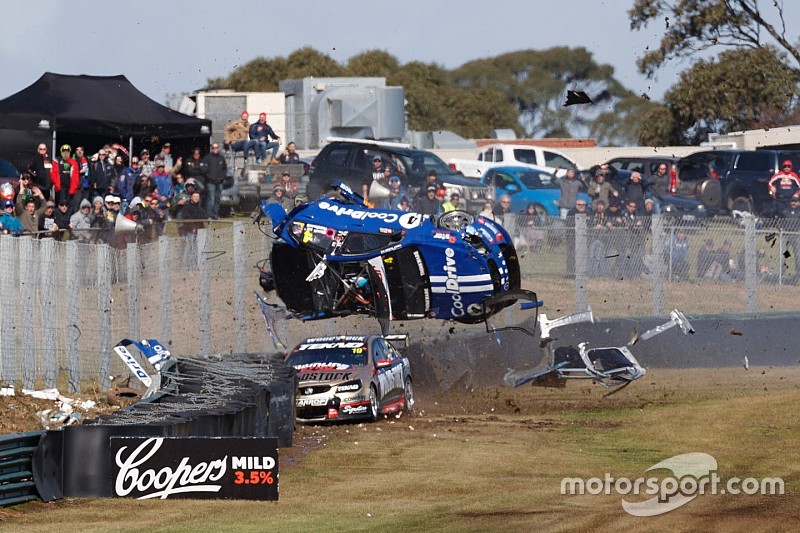 Todd Hazelwood’s final thought before he plunged into the wall at well over 200 km/h during the co-driver qualifying race at Sandown was ‘oh my god, this is going to be huge’.

Hazelwood sparked a spectacular premature end to the first of two qualifying races ahead for the Sandown 500, slamming into the wall after being tipped into a high-speed spin by Jono Webb at Dandenong Road with a lap to go.

The incident happened as Hazelwood and Webb scrapped with David Russell.

Despite the ferocity of the impact and subsequent rollover, Hazelwood miraculously emerged from the wrecked Brad Jones Racing Commodore unharmed.

“We just wanted to get through that race.

“We had a really nasty whack in the front-end, again I was just trying to avoid someone else’s carnage, and we had left-hand-down the whole race.

“I was pretty happy where we were, the pace was not too bad considering we were suffering in a straightline.

“The Nissan car got alongside of us, there was only a couple of laps to go and we were wounded, we were hurting for rear tyres, so I thought I’d just try and file in.

“I knew Jono was there and thought if I just hung where I was I’d be ok and then the next thing I just copped a massive whack in the left-rear.

“When you’re doing 260km/h across the top and get a whack like that you’re just a passenger.

“I just put my hands on my helmet and tried to relax when I hit the tyre wall. When I was going up in the air I thought ‘oh my god this is going to be huge’.

“The team has been doing a really good job and has been getting good momentum going into the weekend.

“For this to happen before the 500 kilometre race tomorrow, we’re not even in the main event yet, I’m just dejected.

“It’s not what I do. I’ve never wrecked a Supercar in my life and I’ve been racing them for a while now. I’m just shattered to be honest.”

While devastated with the damage, Hazelwood admitted he was lucky to have walked away from the crash.

He also praised the new leg protection measures that were made mandatory by Supercars from this weekend onwards.

“My legs were just like a rag doll,” he added. “[The protection has been] put in for this weekend, so thank you to Supercars for implementing that because without that I don’t know if I’d be standing upright as well as I am right now.

“When I landed I thought ‘I’m going to be sore’ and I couldn’t believe once I unplugged the cool suit and radio and stood up, I was kind of laying down on the seat and trying to move my body around and thought I’m so lucky that I’m fit and could climb out of the car myself and get on with it.”

While it is unlikely that the BJR Commodore will return to action this weekend, Hazelwood has already made his comeback, jumping straight into his Super2 car for the second-tier series’ first race after being cleared by the medical centre.