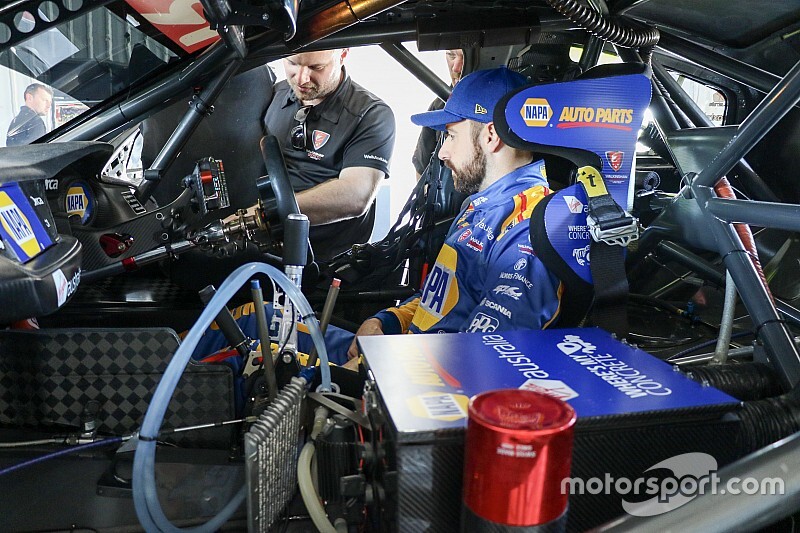 James Hinchliffe was satisfied with his 10-lap 'refresher' in a Supercar on Tuesday, despite the brief run being interrupted by an off-track excursion.

Walkinshaw Andretti United kicked off a three-day test for its Bathurst 1000 wildcard entry at Winton on Tuesday, to help get IndyCar stars Alexander Rossi and Hinchcliffe up to speed before the Great Race.

Hinchcliffe was no guarantee to drive the Holden on the first day, given that he only landed in Melbourne at 5am on Tuesday morning.

However, with his jet lag in check, the Canadian decided to get a head start on his Wednesday programme with a handful of laps.

There was one hiccup, an off-track excursion requiring some minor repairs, but Hinchcliffe was largely satisfied with his first stint in a Supercar since he raced a Garry Rogers Motorsport Holden on the Gold Coast way back in 2012.

"They've changed a little bit, but not too much. You try and take whatever little bit of experience you can from seven years ago.

"Today the plan was always to give Alex more running, and tomorrow will be my day. But it was nice to at least get in and learn where the track goes left and right, and get a bit of a refresher on how the car feels and let that marinate over night.

"Hopefully we can hit the ground running tomorrow.

"The roof, the right-hand side [seat], the [gear] shifter – I haven't had one of those in quite some time. There's definitely a lot to get used to.

"So a lot of it is hammering out the old habits from the IndyCar and trying to re-programme."

While Winton is hugely different to Bathurst in terms of layout, Hinchcliffe is confident the test will still be beneficial heading to Mount Panorama.

"Driver changes are obviously going to be a big thing for us to work on and learn about.

"Like I said, learning the systems of the car and the procedures of the team, there's a lot that can be achieved at a place that is nothing like Bathurst."