How another Supercars out-lap crash can be avoided 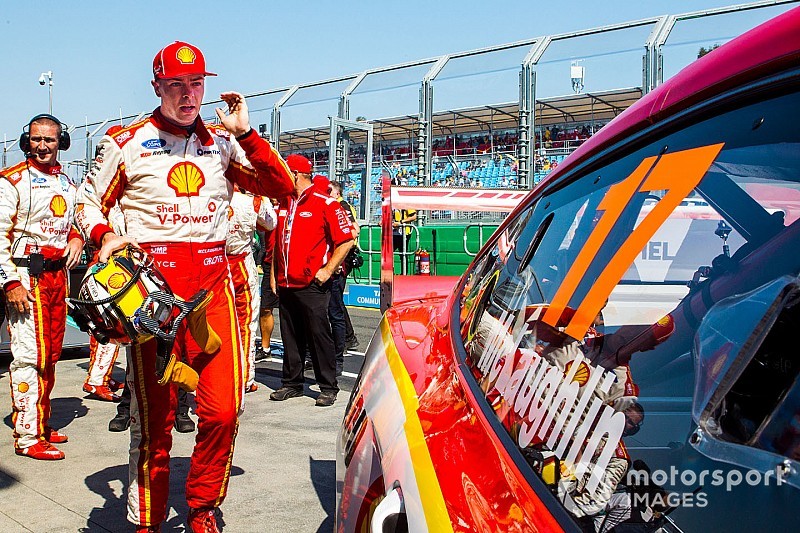 A repeat of the bizarre out-lap crash between Supercars star Scott McLaughlin and Cam Waters can be avoided through a simple rule change, according to a leading endurance driver.

McLaughlin and Waters were meant to start last Saturday's 25-lap race at Albert Park from the front row of the grid, however neither made it to the end of the lap to the grid.

The pair clashed thanks to a bizarre miscommunication, Waters interpreting McLaughlin's hard move to the left as an invitation to pass, when in fact it was part of his tyre-warming procedure.

They ended up on the same bit of road, both cars too damaged to make the start of the race.

Neither driver was punished for the unusual clash, stewards deeming that there was nobody wholly or predominately at fault, while the two drivers quickly cleared the air with a post-race chat that ended with a friendly handshake.

While an out-lap crash is a rare occurrence in Supercars, leading enduro driver Caruso, who will race alongside Waters later this year, reckons it's easy to trace how it happened.

Having only just scaled back to long-distance duties after failing to land a full-time seat for this season, Caruso says he's more than familiar with the pre-race procedure adopted by a lot of teams, which involves getting back to the grid a quickly as possible to exploit the minimum tyre pressure rule.

"Where the problem lies is that ultimately we pressure our tyres, and all this boils down to getting to the grid as quickly as you can so tyres can be re-pressured," Caruso said on the Below the Bonnet podcast he shares with David Reynolds.

"So you leave the pits at 17, or leave with [the pressures] up wherever you want to be, get to the grid as quick as you can, [the team] drops the pressure back down to 17, and off you go.

"Ultimately, what they're trying to achieve is to have a longer tyre life. Which in a 25-lap race, at a high degradation track, plays a big part.

"That's what it's boiled down to in my opinion. [Waters has] wanted to get to the grid to give his team enough time to get his tyres back down."

The solution, says Caruso, is as simple as banning crews from working on cars once they've left pitlane.

"Why not just fix, or amend, the rules? When you leave the pits, you can't touch the car when you get to the grid," he said.

"Everyone knows where they've got to pull up, we've got grid marshals there.

"They pull up, no one touches the car, then we go racing.

"[Supercars] wants to talk about changing things, parity with the cars and all that, but these little bits and pieces can be quickly and easily fixed for the future, so we don't have this drama.

"For me watching the race, does it affect how I watch the race? No. It doesn't change the entertainment levels."

Check out the first episode of Below the Bonnet in full, featuring Motorsport.com's Australian Editor Andrew van Leeuwen, right here.