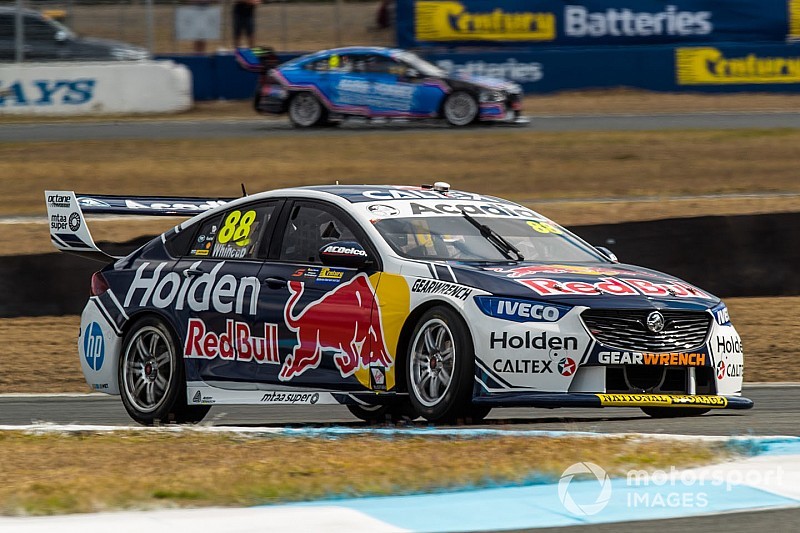 The seven-time series champion came into the QR round sporting a 24-race drought, his last win coming way back at last September's Sandown 500.

It was his longest winless streak since joining powerhouse squad Triple Eight back in 2006.

However he broke it in style at the Ipswich circuit, out-muscling Scott McLaughlin on the first lap and out-lasting a fast finishing Will Davison to take a 2.1s win.

Whincup and McLaughlin staged a wild side-by-side battle through Turns 1 and 2 on the opening lap, the Red Bull Holden driver winning out to grab the lead, while McLaughlin found himself shuffled back to third behind Davison.

Parked behind Davison's Tickford Mustang, and with Whincup 2.9s down the road, McLaughlin tried an undercut with a Lap 10 stop. However a problem on the left front meant his stop was more than 5s longer than usual.

Whincup continued to pull away from Davison across the first stint, his lead 4.2s when he made his stop on Lap 15.

He emerged 6s ahead of McLaughlin, and with clean air and fresh tyres at his disposal.

Davison stayed out until Lap 19, which was enough to not only lose a little more ground to Whincup, but end up behind McLaughlin as well.

McLaughlin did briefly make in-roads on Whincup's advantage, getting to within 4.5s of the leader as the stops shook out.

However with 13 laps remaining the DJR Team Penske driver ran out of steam, which opened the door for Davison to reclaim second place.

With the better tyre condition, Davison was able to eat into Whincup's advantage during the fun to the flag.

But it wasn't enough, Whincup holding on to break his winless streak to the tune of 2.1s.

"I've been reminded, especially the last couple of months, that I haven't had a win for a while," said Whincup. "So it's certainly fantastic to get a win.

"A big thanks to the Holden supporters for hanging in there, we've had a bit of a drought, it's been a tough run, but we've been chipping away."

Second for Davison marked a first podium for the Tickford-run 23Red Racing entry.

"I'm stoked, I'm rapt for [team owner] Phil [Munday]," said Davison. "He's a great fella, great to have in the sport and I'm privileged to drive for him.

"It's been a long time coming, but it's been a good weekend to now so I'm glad I was just able to get this monkey off the back. Hopefully there's plenty more."

Mostert finished up third, having been unable to hang on to Davison in the closing stages despite the pair running an identical strategy.

McLaughlin came home fourth ahead of Shane van Gisbergen, with another pair of Tickford Mustangs sixth and seventh thanks to Cam Waters and Lee Holdsworth.