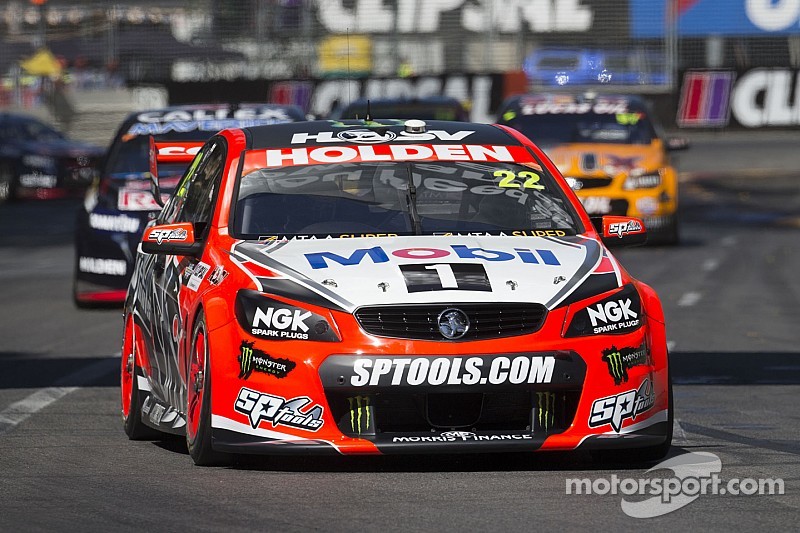 Marcos Ambrose also worked his way into the top ten.

The HRT driver takes the top spot for the final V8 race of the weekend on the streets of Adelaide.

With the final V8 Supercars race set for later this evening, drivers were able to enjoy cooler temperatures during today’s qualifying and top-ten shootout which helped improve lap times.

Although the weekend has been filled with exciting racing, the story of the day, however, was the unexpected performance of returning champion, Marcos Ambrose, who posted a quick qualifying time to make it into the top-ten shootout.

Of his qualifying performance, Ambrose was met with cheers from the crowd as he said, “I forgot there was a shootout. I was just trying to not be last!

“Yesterday’s race was good to get a feel for the car. We made pretty big changes overnight to get comfortable.”

In the end, Ambrose crossed the line with the eighth fastest time ahead of Holden Racing Team driver, Garth Tander, and Jason Bright of Team BOC.

Ironically, Tander was once quoted as saying that V8 Supercars has changed a lot since Ambrose last raced and all he did in NASCAR was turn left. After today’s performance, however, I’m sure Tander isn’t laughing anymore since he was out-paced by the two-time champion.

The Kiwi strikes back

After yesterday’s gut-wrenching day, Scott McLaughlin was looking for redemption and initially had it as he captured provisional pole. However, a late-lap mistake cost him some time which the next driver was keen to capitalize on.

That driver was none other than six-time champion, Jamie Whincup, who was also going for the trifecta pole-performance after capturing the previous two pole positions. He was able to beat out McLaughlin’s time but, due to slippery track conditions, was eventually overtaken by the Race 2 winner, Fabian Coulthard.

Enjoying his first victory on a street circuit yesterday, Coulthard immediately took to form as he beat out Whincup’s time. With provisional pole, he then had the arduous task of watching and waiting to see if anyone was up the task of beating his time.

Revenge of the Gis

All eyes were then on HRT driver, James Courtney, as he went on a wild lap around the streets of Adelaide. As he crossed the line after some slipping and sliding, he secured pole-position with a time of 1:20.539. As he was conducting his cool-down lap, the pole winner commented to his crew that he would need to “change my undies” after that lap.

Race 3 is set to begin later this evening. Be sure to check out V8Supercars.com for live streaming options.