Jack Daniel's Racing driver Rick Kelly finished a brilliant sixth in the opening 250km race of the Telstra Sydney 500 at the Homebush street circuit after dropping to 25th, while teammate Tim Blanchard finished a solid 14th.

Kelly experienced a rollercoaster of emotions today after qualifying second, only to have a mechanical failure ruin his top ten shootout run. After starting tenth Kelly got boxed in against the wall after Shane van Gisbergen’s car broke its steering, dropping Kelly back to 25th. 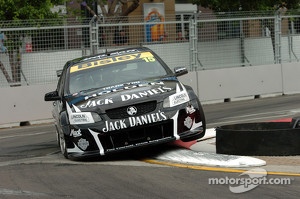 With van Gisbergen’s car stranded, a safety car was called and as Shane tried to limp his car to the side of the track he and the Porsche medical car collided.

Van Gisbergen’s car was then put on a flat top track.

Racing resumed on lap 6 with Kelly 20th and Blanchard 21st but on the following lap the safety car was deployed again as Steven Johnson’s car stopped on the track.

On lap ten racing finally got underway until the third safety car period on lap 19, when everyone took the opportunity to pit for fuel and tyres. By now Rick and Tim had worked their way forward to 18th and 21st respectively.

The racing settled down into at this point and by lap 37, half distance, Kelly and Blanchard had moved up the field further to 10th and 13th thanks to great driving and clever strategy by the Jack Daniel's Racing team.

With ten laps to go the order was Tim Slade, Craig Lowndes, James Courtney, in a three-way battle for the lead. By now Kelly had worked his way up to brilliant fifth place with Blanchard 13th.

On lap 68 Blanchard made a lightning stop for fuel dropping to 14th, his final finishing position. Meanwhile Kelly and newly-crowned V8 Supercars champion Jamie Whincup battled for many laps with Whincup sneaking past Kelly on the last lap for fifth.

Kelly finished a very satisfied sixth after a stellar drive.

Rick Kelly: “Today was up and down like a yoyo all day. But the car is really good and the guys did a really good job in giving me a rocket today. There was some fairly crazy driving going on in the first lap and it put us all the way back to last.

Van Gisbergen broke something and turned hard left and I got boxed in. It wasn’t his fault, just one of those things. As I said the car was good and the strategy great and we were able to just pluck people off.

We got up to fifth but slipped back to sixth when Jamie, (Whincup) got us on the last lap. We had a great battle, I might have been able to keep him out but we were saving fuel and being cautious. All in all it was a very good day”.

Tim Blanchard: “We stayed out of trouble and made sure we didn’t make any mistakes and worked our way forward. We made the most out of every opportunity and I am happy to get up to 13th today”.