Rick Kelly drove a sensational race in the ‘Commitment’ Holden Commodore and finished 9th, in an action packed race on the 5.5km Yas Marina circuit.

Jamie Whincup made it three-from-three with another victory over Will Davidson, with Tim Slade completing the podium positions. 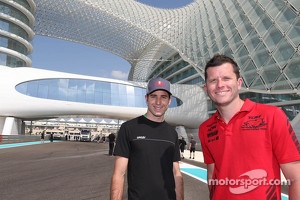 Whincup made a great start and despite a coming together with Will Davidson into turn 1, immediately started to build a lead.

Rick Kelly also made a strong start from 10th on the grid and found himself in a huge pack that included James Moffat, Mark Winterbottom, Lee Holdsworth, Garth Tander, Craig Lowndes, Fabian Coulthard and David Reynolds, battling for fifth place.

The battling was fierce with the pack running three wide down the long straights.

Rick passed both Coulthard and Reynolds to move to 9th on lap two, but later that lap chaos ensued at turn 17 when Jonathon Webb crashed into the rear right corner of Jason Bright (BOC), sending Bright into a spin.

Bright’s car spun back into the path of oncoming traffic and was slammed into by Karl Reindler who was then hit in the rear by Dean Fiore.

As a result of a split fuel cell, Reindler’s car erupted in flames, but Reindler was quickly out of the car and okay.

The field then spent four laps behind the safety car, as officials cleaned up the mess and removed the damaged cars.

The safety car pulled in, leaving the field with a six-lap sprint. Once again Whincup led the pack from Slade and Davidson.

Kelly was still battling the pack for fifth while Tim Blanchard, getting more comfortable on the soft tyres, moved up to 19th.

On the penultimate lap Will Davidson lunged past Tim Slade to grab second place, the same finishing position he achieved for the previous two races.

Kelly continued to battle to the flag with the big pack and ended the race ninth, despite the best efforts of Fabian Coulthard to pass him.

Tim Blanchard was passed by Jonathon Webb in sight of the chequered flag, and finished 22nd.

After the final interrupted, twelve-lap race, Whincup’s win gave him a 296 point lead over Mark Winterbottom with four races to go.

Rick Kelly – “Today was pretty good for the last race. We made a few changes for today which really helped us.

We're having trouble getting the old girl off the line at the moment, because of a couple of small things we need to tune up and I lost three or four spots oof the start, but got them all back by the end of the first lap and moved up one to put us ninth.

I was a litle concerned about our pace after the restart but everything stablisied so it was good. It was a good result to sneak back up to ninth as a top ten is always good for us. I'm very pleased for the whole team".

But I was really happy with today and to be able to move up a few positions and now I am really looking forward to Winton”.

IRWIN Racing move up the standings in Abu Dhabi

Dick Johnson secures an exciting future for his team