In a tough race for the new V8 Supercars squad, Kelly claimed his 11th place result was “almost like a win” after a tough day at the office.

In a tough race for the new V8 Supercars squad, Kelly claimed his 11th place result was “almost like a win” after a tough day at the office, which included an extra pit stop than all of those cars he finished behind. 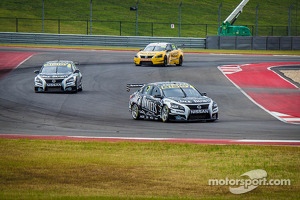 The #15 Jack Daniel’s Nissan of Rick Kelly/Karl Reindler finished 16th, hampered in the middle part of the 500km race with a small mechanical issue. The problem was rectified in his final stop, leaving him to charge through to 16th with a number of clean and clever passes.

It was a tough day for the two Norton-backed Nissans. The #36 Michael Caruso/Daniel Gaunt car suffered from an electrical problem before the race started, forcing them to start from pit lane. Gaunt suffered a minor off during his stint, but fortunately, it gave him good track position when the first Safety Car came out.

Caruso jumped in the car and was looking like running inside the top 20, but a number of issues saw them finish down in 20th.

Douglas raced competitively during his stint and handed the car to Moffat in 19th only for the suspension failure to put the car out of the race for 37 laps.

The Norton Nissan crew worked hard to ensure the #360 Altima got back out onto the track to score valuable championship points.

The next event of the V8 Supercars Championship will be held at the world famous Mount Panorama circuit for the Supercheap Auto Bathurst 1000 on October 10-13.

“We didn’t make any mistakes, Perry my engineer did an awesome job to keep us on the lead lap and the car was great, so for the amount of speed we were lacking up the straight and the amount of agro we were copping from cars behind, I think to finish 11th is an awesome result.

“When we get a little bit more straight line speed under our belt the cars are going to be extremely good.”

David Russell – #7 Jack Daniel’s Nissan Altima (Qualified: 10th / Finished: 11th): “I was starting in the car, so I had to get odd the line well, I managed to get a good start, so the priority from there was just to shake the cars behind out of the draft because I knew when we got on the back straight that we’d be vulnerable,” David Russell said.

“I just had to press on and manage those gaps, we had a few safety cars early and the main thing I had to consider was minimising the risk of losing too much time if someone did get a run on me down the straight.

“I was happy with the stint and to give the car back to Todd in good condition, which set him up to finish the race, so very happy, it was a great day.”

Rick Kelly – #15 Jack Daniel’s Nissan Altima (Qualified: 21st / Finished: 16th): “We wanted a good clean run today, we knew we weren’t going to be challenging up the front with the issues we have at this particular circuit, it’s not easy, so to finish 16th, we’re pretty happy,” Rick Kelly said.

“In the second last stint we had a little issue with the car which was rectified in the last pit stop so we could battle again.

“I actually really enjoyed the race, Karl did a great job, the team did a great job and for us it’s really good preparation for Bathurst, so we’re pretty happy with that.

“Todd up there as well in 11th is great for the whole team, so we just need some more results on Bathurst to keep building momentum.”

Karl Reindler – #15 Jack Daniel’s Nissan Altima (Qualified: 21st / Finished: 16th): “I’m incredibly happy, given we’re on the back foot with the straight line speed, which made it really tough to race. I had so much pace on a lot of the guys in front, but it was incredibly difficult to race and pass,” Karl Reindler said.

“To finish P16, Rick did an amazing job, as always there are issues along the way, but we’re here at the end, reliability was great in the car, so bring on Bathurst.”

“I am disappointed and I’m not sure what’s going on. We need to get back to the shop, sit down and really go over the preparation and procedures.

“We knew this event would be tough, but we seemed to make things worse for ourselves.”

Daniel Gaunt – #36 Norton Nissan Altima (Qualified: 24th / Finished: 20th): “We finished, and that’s about as much we can take out of it,” said Daniel Gaunt.

“In my stint, I made one mistake early and went off the track. It actually helped us in the long run as we managed to time our pit stop under Safety Car nicely.

“We need to find a bit more pace for Bathurst, and it’s never going to be easy with the horsepower and fuel burn, but we’ll keep chipping away at it.”

James Moffat – #360 Norton Nissan Altima (Qualified: 20th / Finished: 26th): “There’s not much to say really. I’m not quite sure what happened with the suspension failure, but obviously something has broken that wasn’t supposed to and it was a pretty scary incident,” said James Moffat.

“I was right behind Caruso at the time and I almost torpedoed into the back of him, and that wouldn’t have been a great look if we’d wiped out two cars in one shot.

“It was a disappointing day, to be honest. We knew we were up against it and we were hoping to get as many points as we could, but we didn’t do that.”

Taz Douglas – #360 Norton Nissan Altima (Qualified: 20th - Finished: 26th): “It is a disappointing result. You come into the events, and you know you can’t win the championship, but it can certainly put a dint in it, and unfortunately, that’s what’s happened to James today,” said Taz Douglas.

“There’s not much we can do at the moment, without the horsepower.

“That stint I did was one of the hardest I’ve ever done. It’s like you’re qualifying every lap through the corners and as soon as people check up on you, you become vulnerable.

“I felt like I was a hazard out there because when people are behind you, they are too eager to pass you.”