Rick Kelly has accepted the blame for his wild off-road excursion after a restart clash with Shane van Gisbergen in Perth.

Kelly and van Gisbergen were running fifth and sixth respectively on a Lap 55 restart when contact saw the Nissan driver take a high-speed trip across the grass alongside the pitwall.

While initial footage made it seem like van Gisbergen hit Kelly from behind, overhead camera angles showed that the Red Bull Holden driver held his line, and it was Kelly that misjudged his move across to cover.

Kelly admitted that was indeed the case, saying he "took a punt" at closing down the inside lane in the night time conditions and didn't quite get it right.

"The rule is that we can overlap after the last corner but not overtake until the line. So I started to move right on the guys in front, and Shane had momentum on me, more momentum than I expected," said Kelly.

"I certainly can't point the finger at him, it's just one of those things where the restart is one of those things that creates drama. He's got every right to keep his foot in it, which he did, and then I ended up on the grass, so it becomes my error.

"All you can see is a bright light in your mirror, you can't see if there's a car next to you or not. In the day time, that probably wouldn't have happened because I would have looked in the mirror and seen he had overlap. But all you see is a headlight.

"So you've got to take a punt, and the punt I took was the wrong one." 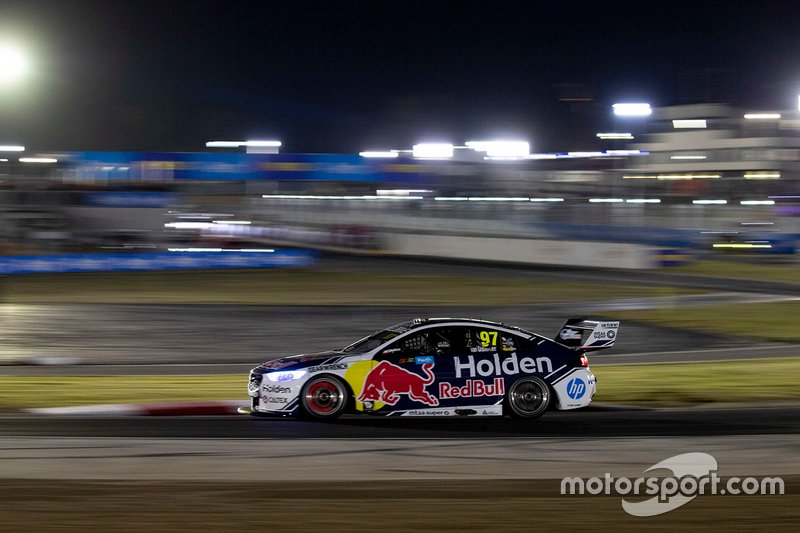 Van Gisbergen added that he felt that he caught Kelly napping on the restart.

“He wouldn’t want to give up fifth place, [I] caught him napping there. You never want to do that, but I had the right of way.

“He tried to push the limit and I guess push himself ahead, as you can do, but I was too far alongside.”

While Kelly managed to rejoin without serious damage, running through foam advertising blocks meant his car's air intake and brake ducts were blocked after the incident.

That left him limping through the pack, something he says made him feel like a "wounded goat" as he tried to get the foam dislodged.

"You're then a wounded goat, and they smell blood and they get into it," said Kelly of his frantic battle in the laps following the incident.

"I got pushed and pulled all over the place, which is expected when a car is limping around.

"I tried to get [the foam] dislodged, which I did, but there was some caught in the brake duct, and that would increase the temperature greatly and likely explode the rotor. We had to come back in [to the pits].

"You can't help but feel depressed when you don't get the result that was in front of you, but we'll go to the next one and go again."

Poor Supercars season 'shook everything up' at Tickford