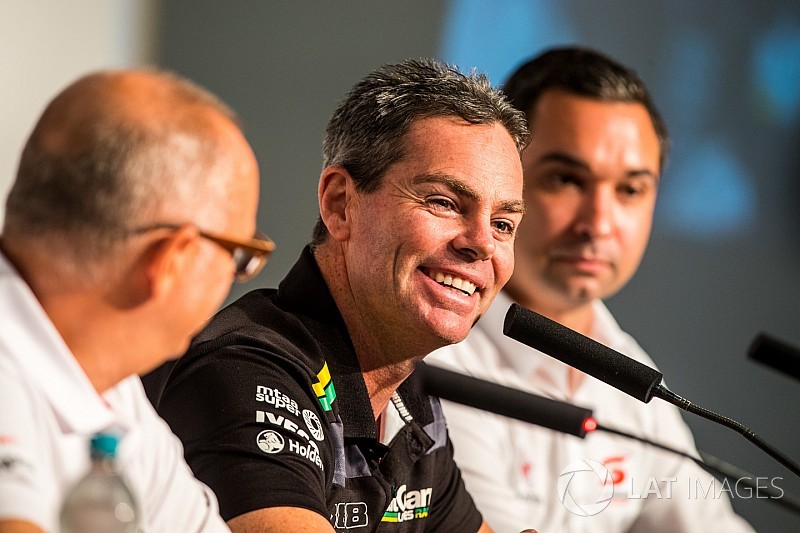 Craig Lowndes admits he was at times challenged to keep his emotions in check during the Townsville weekend.

The veteran Supercars star confirmed his impending retirement from the series just two hours before the first practice session in Townsville last Friday, the majority of the Triple Eight crew having only heard the news earlier that morning.

While his on-track performance looked to be completely unaffected by the breaking news, Lowndes collecting a pair of fourth places and running with the other title contenders all weekend, the veteran later admitted it wasn't quite that simple.

According to Lowndes, the first challenge was switching back into race driver mode for Practice 1, having just delivered the news to the crew and then the media.

Then, he had to continually re-focus as he dealt with a constant stream of well wishes from the fans that were on the ground.

“It was difficult in the beginning," he said. "You drive the car out sort of knowing that this was going to be your last time here, and you sort of go through all of those emotions and thoughts.

"But once you’ve got through the first couple of laps you’re back into race trim, [engineer John 'Irish' McGregor] is saying we’re going to a bit of roll centre or what our first change was, once you start getting into that mindset, it was pretty easy.

"I think it was more a factor of going from the transporter to the garage each time when you’re going through the fans and they’re reminding you of what you’ve just announced. One part of it is difficult because you’ve got to keep a mindset of what you’re going into, but at the same time it’s really appreciative, and that’s why I said thank you to the fans because they are the backbone of motor racing.

"They’ve been a great supporter of us, we hopefully have given them something back in the sense of why we do what we do, but it’s nice to see the support.”

Having spent 12 years as Lowndes' teammate, Jamie Whincup offered words of support for the veteran following his Saturday race win in Townsville.

Whincup said Lowndes was integral in turning him from a 'punk kid' into one of the sport's all-time greats, and that he's always wished he could pay that forward to another young driver.

“I rolled in, young punk, thought I knew everything but knew nothing and Lowndesy just welcomed me with open arms and certainly helped me out,” said Whincup.

“I’d love the opportunity to repay another young kid.

“[I] didn’t get that opportunity with Shane [van Gisbergen] because he was already established when he came [into the team], but hopefully one day there’s a young kid who’ll come into our team and I’ll have the opportunity to do the same thing.

“It’s difficult to talk about because this is not just something we do on the weekend, this controls your life; it’s a life sentence. For Lowndesy to have done something for 20-plus years, it’s clearly emotional for him at the moment.

“I think that’ll sort of relax a little bit, but then of course it’ll all come back hard and strong come Newcastle. We’re just there for it, we’re very thankful for the time and everything he’s done for the team.

“He’s the icon of the sport, took over from where Brocky left off and is going to be missed by the whole fraternity.”

Why Simona is earmarked as the new Craig Lowndes