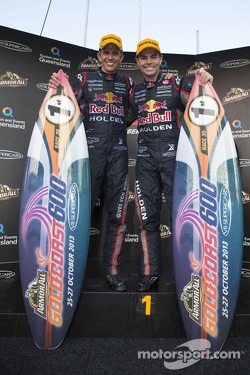 After yesterday’s victory, the #888 duo drove a tidy race, but were ultimately hampered by having to double stack in the pits behind team mate and fellow PIRTEK Enduro Cup contenders Jamie Whincup and Paul Dumbrell. A strong final stint on the Surfers Paradise street circuit brought the pair home in eighth, which was enough to take the Pirtek Cup by 78 points.

They entered the event yesterday second in Enduro Cup standings, but the victory gave them a healthy lead over the #1 car.

The new for 2013 competition was contested over the Sandown 500, Bathurst 1000 and the Gold Coast 600 events to determine V8 Supercars’ best enduro pairing.

Whincup and Dumbrell finished fourth in today’s race which snared the runners up spot from the Pepsi Max Crew FPR Ford of Bathurst 1000 winners Mark Winterbottom and Steve Richards.

The sister Pepsi Max Crew FPR Falcon of Will Davison and Steve Owen claimed fourth in standings, whilst a standout in fifth was the #4 IRWIN Tools Erebus Motorsport E63 AMG of Lee Holdsworth and Craig Baird.

The final race of the Pirtek Enduro Cup was won by the Bottle-O Ford Falcon of David Reynolds. He finished ahead of Brad Jones Racing’s Fabian Coulthard and Luke Youlden. Russell Ingall and Ryan Briscoe came home in third.

Coming into this weekend, there were 12 combinations in mathematical contention to win the PIRTEK Enduro Cup. The endurance events this year have been an outstanding competition - for the first time with four manufacturers - that will once again play a pivotal role in the outcome of the V8 Supercars Championship.

The PIRTEK Enduro Cup has been signed between V8 Supercars and PIRTEK for four years and the stunning trophy, created by Queensland artist James Corbett was presented to Lowndes and Luff by PIRTEK CEO, Stephen Dutton today.

Craig Lowndes: “The PIRTEK Enduro Cup really is a Championship within a Championship and it was fantastic to win this inaugural version with Warren,” said Lowndes. “I think the concept from the Queensland artist that created the trophy is a unique one, which makes it a little more valuable.”

Warren Luff: “It is fantastic that PIRTEK have come on board to support such a concept and work with V8 Supercars to create the PIRTEK Enduro Cup. They have been long term supporters of the sport and it really gives us something else to fight for. I’m sure it will become a valued piece of silverware as the prestige develops over the next few years.”