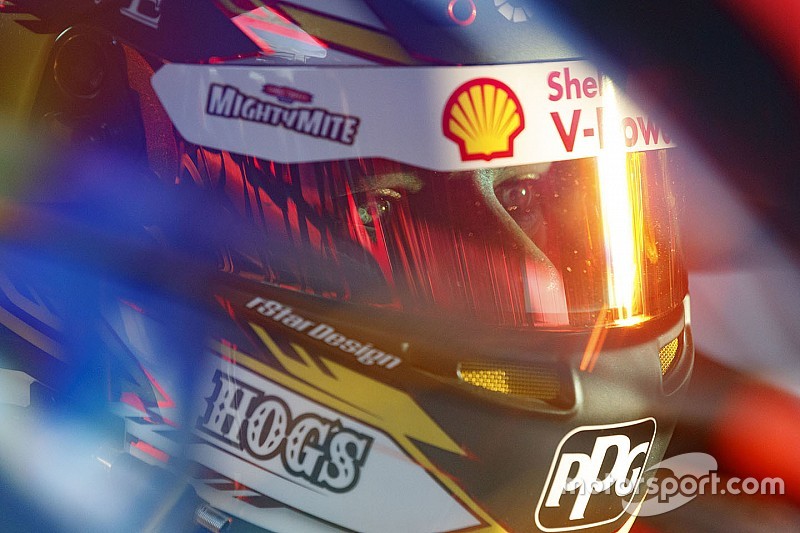 Scott McLaughlin has laughed off the boos from Holden fans that rang out during the Bathurst 1000 podium celebrations, with a light-hearted call-back to the famous 'pack of arseholes' incident.

The Penske Ford driver made his first appearance on the Mount Panorama podium on Sunday evening, he and co-driver Alex Premat combining to finish third.

However they were the only Ford pair on the podium, joining Holden duos Craig Lowndes and Steve Richards, and Scott Pye and Warren Luff.

That meant the crowd that gathered below the podium post-race was Holden-heavy in its support, leading to McLaughlin's first Bathurst podium to play out to a chorus of boos.

He played along with it, though, pointing to the Blue Oval on his race suit and referencing the incoming Mustang during his trophy acceptance speech.

McLaughlin cheekily suggested later that he even thought about reprising a line made infamous by Jim Richards on the Bathurst podium back in 1992.

“I guess [when] I walked off the podium, I was a bit… it’s something you dream about to be on the Bathurst podium and I missed out a couple of times," said McLaughlin.

“To be close to the win, not that close, but it's nice to be right there. I probably picked a cool [podium] to be on, it was very special.

“Congratulations to [Lowndes and Richards], they drove a faultless race… it was something I’ll cherish forever because that was cool being on the podium with them.

“As a Ford driver I got booed from pillar-to-post, that was pretty interesting. I was close to calling them a pack of arseholes, but probably shouldn’t do that!”

Not only was the third-place finish a breakthrough for McLaughlin in terms of his Bathurst record, it's also ensured he's right in the championship hunt with three rounds to go.

With fellow Kiwi and series leader finishing fifth on Sunday, the gap between the pair has been cut down from 55 to 19 points.

“We aimed for a top five, a solid result, because it’s gone begging for me at this race the last few years,” McLaughlin said.

“I think we achieved what we wanted to achieve, we caught some of the lead back.

“To catch Shane on a track everyone knows he’s very fast at and their car was always going to be very fast here, I thought that was a very good job well done by the whole crew.”

Lowndes gets new backing for New Zealand Supercars round