Scott McLaughlin and David Reynolds have traded blows on both their Supercars rivalry and their controversial Townsville clash during podcast appearances in recent days. 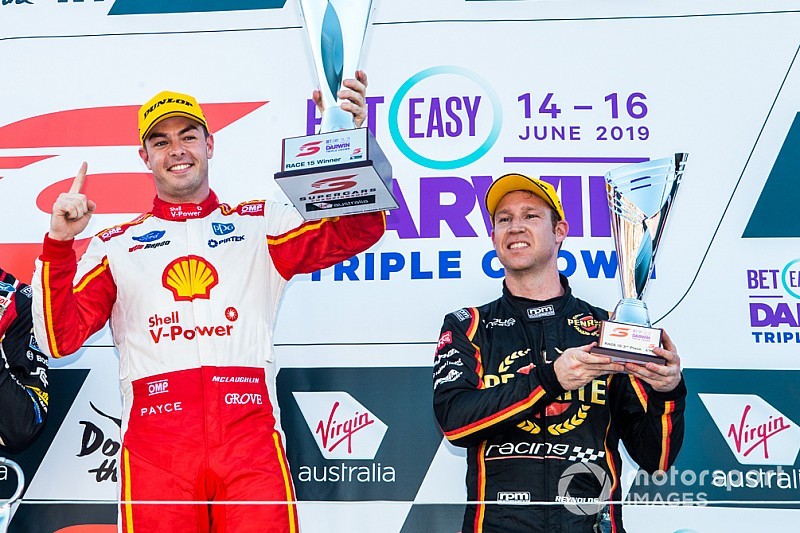 There's been a simmering rivalry between the two for much of the season, initially fuelled by Reynolds' blunt take on the Mustang's perceived advantage and the role that's having in McLaughlin's dominance, much of which he has voiced through his Below the Bonnet podcast.

That led to McLaughlin hitting back in his own podcast, Balls and Bumpers, ahead of the Townsville round, with claims he's been "copping it from Reynolds".

The rivalry, dubbed the 'podcast wars', was then kicked up a notch on the opening lap of the Sunday race in Townsville when the pair clashed on the run to Turn 2 while squabbling over second place. The on-track run-in was followed by a pair of heated post-race exchanges.

Both Reynolds and McLaughlin have since reflected on the rivalry in subsequent podcast appearances, with the Erebus Holden driver unapologetic about his Mustang comments and adamant that McLaughlin shouldn't be looking to him for positive reinforcement.

"I don't tolerate bulls**t," he said on the most recent Below the Bonnet.

"That's why I like speaking how I feel. Sport has to be fair at the end of the day, and I like to call it out when I don't see it as fair.

"I think [McLaughlin] gets plenty of credit, it doesn't have to come from me. If he's looking [for it] from me, he ain't going to get it. I'm in competition with him."

McLaughlin, meanwhile, said that it's inevitable that rivalries will be formed in fierce competition, and that it's impossible to be friends with everybody.

"I'm not really stressed. Rivalries are good for the sport," he told AFL star and Balls and Bumpers co-host Jack Riewoldt on this week's episode.

"Dave says he wants to be friends with everybody and all of that sort of stuff, but he's competitive, we're all competitive, we all want to beat each other. In this sport you're going to get a point where you don't like someone. You can't like everyone, that's just BS.

"It's a rivalry, it's a good rivalry. At the end of the day, I'm going to be racing Dave for the rest of the year. He's fast, he's always going to be at the front.

"It hasn't made us closer, by any means. It's certainly a rivalry that Supercars is relishing. It's not going to affect me going for a move on him or racing him side-by-side. But it's probably a bit different off-track.

"We certainly won't be going down the pub and having a beer, that's for sure."

Reflecting on the crash itself, McLaughlin admitted that he was "overly cautious" on the brakes, but argued that Reynolds still went for a gap that was never there.

"I believe he made a gap, he didn't actually go for one," said McLaughlin. "And it shows when he's hit my rear wheel. He hasn't gone up the side of me, it's wheel-to-wheel contact with my rear wheel.

"He says I moved, I don't believe I moved, if anything it was a millimetre."

"I don't disregard hard racing. I think that's awesome, him having a go and me and him banging doors. I like racing hard.

"But I just thought at the time, we hadn't driven on that track [in the rain], I just felt like I was driving to the conditions."

Reynolds, meanwhile, is certain the gap was there, and that McLaughlin moved across once he's committed to the inside line.

"I started to go right, but I got to a point where I was going to hit the fence," he said.

"I'm a racing driver, [the team] pays me for my judgement. My judgement call was that there was enough room there. I started to make the pass, he didn't like it so he turned in on me.

"If there was no room there, like people have been saying, I would have just drilled him in the back. I wouldn't have got that far down the inside of him before he closed the door.

"But there was enough room, I started to make the move, he didn't like it and he turned in."

As for the post-race exchange with McLaughlin, Reynolds said: "I can understand. His day hadn't gone his way, so he's looking for someone to blame and he's trying to blame me.