A strong combined points tally from his fourth, fourth and sixth place results has earned Caruso the top five slot.

Michael Caruso will start in fifth place for the final V8 Supercars race around the streets of Albert Park tomorrow.

A strong combined points tally from his fourth, fourth and sixth place results has earned Caruso the top five slot, putting him in with a great chance of a podium in the double-points final race tomorrow. 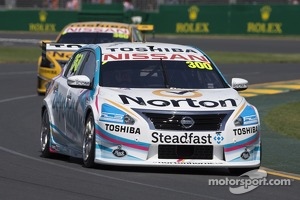 Caruso finished today’s 12 lap sprint in sixth place but lost ground at the rolling start. He was good enough to hold onto sixth place.

Todd Kelly finished 10th today and will start ninth in the final. He was lucky to make his way through today’s melee with only damaged front bodywork.

Rick Kelly maintained his mortgage on 11th place, having finished all three races in that place. The former V8 Supercars champion completed today’s race with bent steering after a clash with a rival. He will start tomorrow’s finally from 11th.

The fourth and final V8 Supercars race on the streets of Albert Park will be held at 1.20pm tomorrow.

“Our engine is costing us positions, especially at the restarts. We become very venerable. It’s hard to swallow, because I feel we’re good enough to be up the front.

“As a group, we need to continue to work on our overall power, but set-up wise, I think we’re doing a great job with the car.”

“We got back up to 12th when others had some dramas, and to be fair, that’s about where our car is at the moment. We’re not really good enough to move forward, but better than those behind us.

“We’re struggling for tyre life over the race and the balance drops off in the car. We need to work on fixing that for Tasmania.

“Eighth on combined points gives us a good start for tomorrow, so if we can make some improvements overnight, hopefully we can stay inside the top 10.”

"We got an ok start but got hit from behind at turn one, which drove us into the tyres, and I think it was (Jamie) Whincup.

"It bent our steering pretty bad, the steering wheel was a fair way left hand down, and we just had to get by like that.

"The next restart again was very interesting, because someone pitted, so the whole field was actually out of formation, and because of the rules there was nothing we could do.

"We lost out on both starts and still finished, so we're pretty happy with that, we're just a little bit disappointed with the damage we've got.

"We'll polish it up and go again tomorrow."

Todd Kelly, #7 Jack Daniel's Racing Nissan Altima (Race 1: 10th / Race 2: 13th / Race 3: 10th): "With the carnage out there, it was more than a scrape through, it was more of a barge through with the incident over the back with Chaz Mostert and Dale Wood," said Todd Kelly.

"I nailed someone pretty hard there.

"I'm not sure who it was, and I thought I might have done a lot of damage to the steering, but luckily it was only bodywork and I was able to press on for the rest of the race.

"It was a fairly decent mission trying to avoid the carnage there, so it's good to end up where we did.

"The car wasn't too bad, we'll do a little bit of fine tuning for tomorrow and we'll see where we can get to."