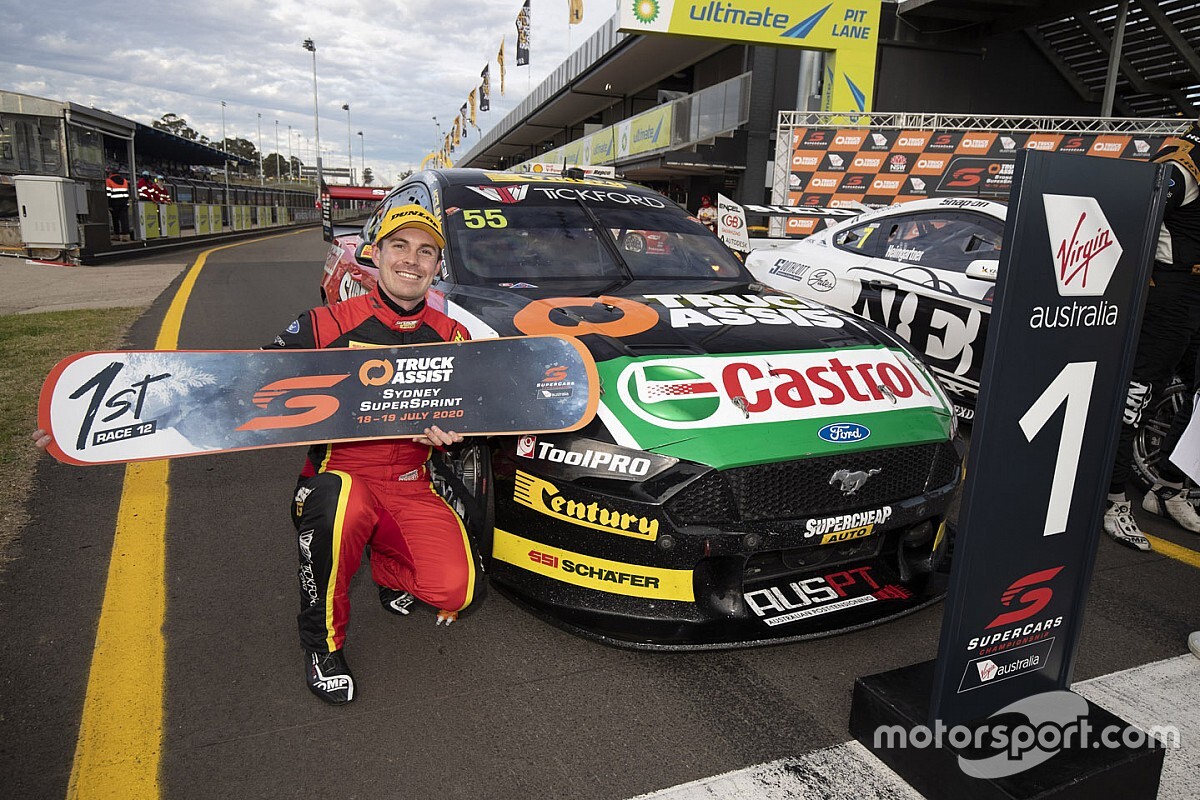 Jack Le Brocq says a bit of "mischief" during one race in Sydney helped him to a maiden Supercars win in the next.

The Tickford newcomer took his first main game victory in the third of three races at Sydney Motorsport Park after a thrilling four-way battle with Andre Heimgartner, Todd Hazelwood and David Reynolds.

The unconventional lead battle pack was the result of the radical new tyre regulations, those four the best of the drivers that had saved their two sets of softs for the final race.

Le Brocq, however, later revealed that his Plan A wasn't to have so much fresh rubber left on Sunday afternoon.

He had instead hoped to spread his soft tyres across Sunday's two races, only for some "mischief" early in Race 2 – namely being forced into the grass while trying to pass a slow-starting Mark Winterbottom – leading to a switch to an 'eggs in one basket' strategy.

“At the start of the weekend we were always going to write the Saturday off with hard tyres,” Le Brocq explained.

“That was always our plan, to sort of give us the opportunity of a better Sunday.

“The plan wasn’t actually to put all the eggs in one basket for one race day, but we had a bit of a bump and a bit of mischief at the start of Race 2, so we decided to put another set of hards on it and press on from there.

“It ended up working out alright."

The win exposed the difference between the hard and soft rubber at SMP, Le Brocq finishing the first two races 16th on the hard tyre before vaulting to the front thanks to the softs.

The rules also meant the usual front-runners like the DJR Team Penske and Triple Eight drivers were effectively out of the running for the third race, having already taken the best of their soft rubber.

While the rules have drawn some criticism for creating "fake racing", Le Brocq doesn't feel that not having to race the big names cheapens the win.

"I'm going to take it for sure," he said. "Hopefully we can continue on and get a couple more under our belt."

Le Brocq's success marks a significant turnaround for the 28-year-old off the back of two very tough seasons with the Tekno Autosports squad.

In 2019 he only finished inside the Top 20 seven times from 31 races, the lack of results paired with speculation that he wouldn't even see out the year.

Reflecting on his Tekno stint Le Brocq says his confidence definitely took a hit, but that it's already on the mend thanks to Tickford Racing.

“After the year we had last year, your confidence always takes a knock," he said.

“We were on struggle street last year, but these guys have given me the opportunity to show what I can do in a race car, and given me an awesome set of wheels to do that with.

“[I’m] just learning a lot from them. They’re very good at building my confidence up and they’ve done an awesome job of that over the past six months already to start the year.

“We’re only three rounds in, so I’ve got a lot to learn with how to drive this car correctly. But I’m loving every moment and they’re doing a ripper job of helping me get up to speed.”

McLaughlin unfazed by lack of formal round win