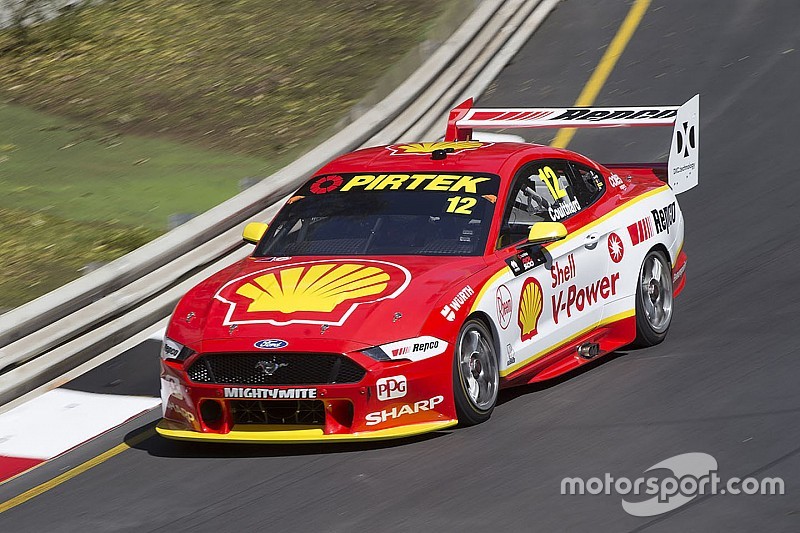 A Supercars-spec Mustang has appeared in the foyer of Ford's World Headquarters in Michigan.

Two DJR Team Penske employees recently travelled to the US to take a Falcon Supercar that had been in storage at Penske's workshop in North Carolina and not just convert it into a Mustang, but make sure it meets the strict regulations required by the Aussie category for current-spec cars that are housed overseas.

The car has now been put on display at Ford's World Headquarters in Dearborn, Michigan, to help celebrate the brand's return as a full-blown Supercars manufacturer with the new Mustang bodyshape.

The initiator of the project was Ford Performance global director Mark Rushbrook, who asked Supercars CEO Sean Seamer during a trip to the US over Christmas if it would be possible to have a car on display.

While it may seem like a straightforward request, Supercars has strict rules about cars being overseas, in a bid to avoid extensive off-shore R&D work.

Sourcing the car was easy enough. DJRTP shipped an FG Falcon chassis used by David Wall during the 2014 season to North Carolina shortly after the merger in 2015, with a view to use Penske's robotics to mass-produce the control Supercars chassis.

The chassis production plan fell flat, but the car never returned to Australia. It's been at Team Penske HQ ever since.

To bring the car back to life, Supercars needed to provide Ford and DJRTP with a list of requirements. It included removing the undertray and gurney flap, removing a number of sensors, and fitting a special ECU that came from Supercars itself.

Once that work was completed, the car went to Dearborn and has been in the lobby since last Monday.

"It is sitting in the lobby of Ford's World HQ and was built up at their request and in step with Supercars. Ford owns the car."

Rushbrook added: "As we have our global approach to our racing, we want to communicate it to our global employees.

"We had the idea at the end of last year that, 'hey, why don't we get a car and put it on display, have it as a showcar?'

"Through the work that was done in January and February, it got up on Monday, so five days ago it got into World Headquarters in the lobby, so our employees in Dearborn could see it and celebrate it in anticipation of coming out here this weekend."

While the unique Mustang will be in Dearborn until the end of the month, it could travel the US once its rotation in the lobby is done.

"There's about seven or eight cars that are normally in [the lobby] and we've got, for our racing programme, two of those slots.

"We rotate them every month or so," Rushbrook said. "The Supercars Mustang will be there for about a month, through to the end of March, and we haven't determined where it's going to go from there.

"We send them all out around the country, we use our race showcars for recruiting on college campuses and things like that, so my guess is it'll get pressed into service for that at some point.”