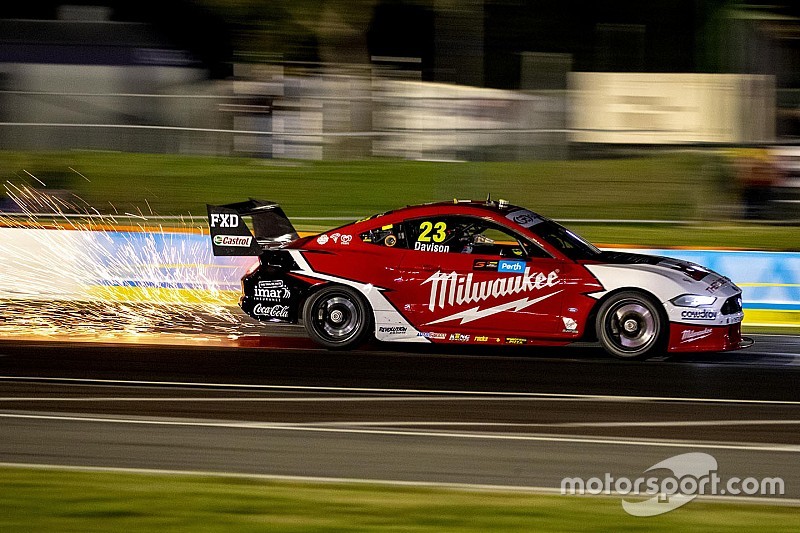 Ford Mustang drivers say a dramatic increase in grip at Barbagallo Raceway has made it impossible to judge what affect the Supercars parity aero adjustment has had on the car.

After a dominant start to the 2019 season, Ford's new Mustang was handed an aero parity adjustment ahead of this weekend's Perth SuperNight round, which consisted of a re-sized rear wing endplates, a shorter gurney flap, and a shorter undertray.

While expected to reduce the car's ability to create mid-corner downforce, Mustang drivers Will Davison and Chaz Mostert reckon they'll have to wait until another circuit to get a proper read on the changes.

According to the Tickford stars the newly-resurfaced Barbagallo Raceway will make it impossible to determine if the car's characteristics have changed – something Davison says he communicated to Ford Performance bosses Mark Rushbrook and Brian Novak straight after this evening's practice session.

"In all reality, you're not going to really feel those sorts of changes with the tarmac and the grip level out there," he said.

"I said that to the Ford guys that are here from the States and Australia, obviously they were straight in 'how does it feel?' – it feels great, but I don't think we'll get a true indication until we move on to some other circuits."

Mostert added: I don't know. It's such a different track to where we've run for the rest of the year.

"Maybe the grip might mask a lot of our problems this weekend. Look at the times, it's super tight out there.

"This type of surface always makes cars that might be a little bit out of the window straight into it."

All six Mustangs were still in the Top 10 in opening practice, with Mostert, Davison, and Fabian Coulthard finishing second-to-fourth behind pacesetter Jamie Whincup.