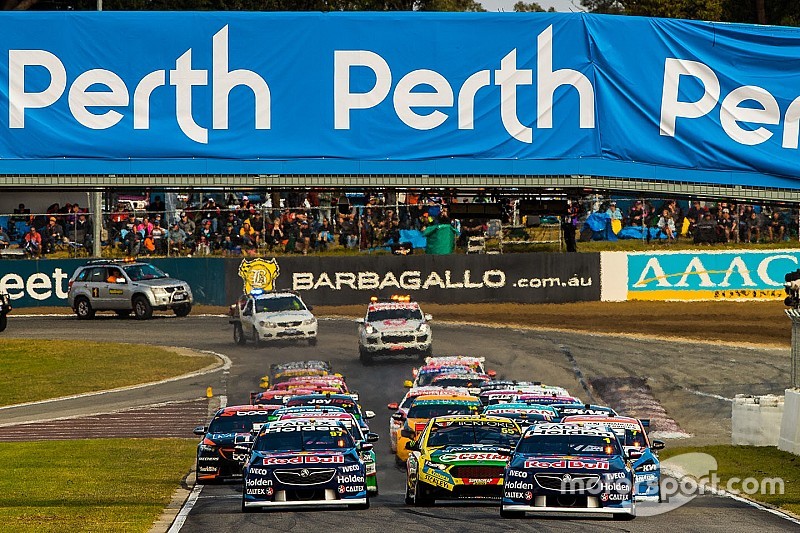 A new multi-year deal between Supercars and the West Australian government won’t be struck until after next year’s night race at Barbagallo Raceway.

An existing three-year deal between Supercars, the WA Sporting Car Club and Tourism WA ended after this year’s Perth SuperSprint back in May, leading to discussions between the three parties over a fresh deal.

While initial talks were centred around another three-year agreement, the decision to run next year’s Barbagallo Raceway event under lights has led to a change in tack.

The 2019 Perth SuperNight event will now be run on what’s effectively a one-year deal, as both circuit operator and series trials the format on the 2.41-kilometre track.

Should it work, talks will begin for a new longer-term deal to make a night race a permanent fixture.

“We’re working on a new model with the West Australian government, we’re testing the night race over there,” said Supercars CEO Sean Seamer.

“This year will be a proof of concept, similar to what we did in Sydney.”

“It’s a very welcome change in format. It needed something to inject a whole new level of excitement, and I think this will do it,” he told Motorsport.com.

“We’re delighted to give this a go, and I’m confident it will reap a better result. But we should all have the opportunity to see how it works in practice.”

The WASCC is no stranger to hosting night events, with state-level meetings under lights usually opening the season at Barbagallo Raceway.

However Stachewicz says more lighting will be required for an event that will broadcast on TV, the club now working on whether to install more permanent lighting or, in the short term, opt for a temporary system like what was used in Sydney back in August.

“We’ll need to properly understand what the requirements are going to be in terms of television coverage,” he said.

“This is quite new, we’ve talked about it but it wasn’t confirmed until now, we’re going to have to understand that a lot better.

“I’ve spoken to Supercars and we’ve said ‘look, if we can make a good case for investment for us to do more night events and an ongoing night race with Supercars, we could look at [permanent lighting]’. If the numbers on that don’t quite stack up, there are plenty of good contractors that will provide us with the temporary lighting that we need.

“We understand that we want the main straight and the major areas of coverage to be lit up well, and a lot of it is already. In fact it gives it a good ambience, for the spectators it will be great.

“If it’s lit up like Times Square it takes away from it. We don’t want to kill the atmosphere with too much light.”