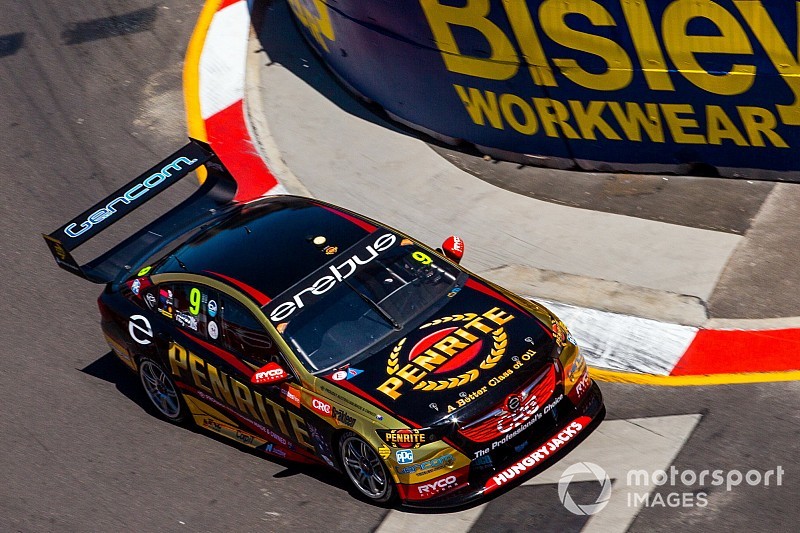 David Reynolds jumped title contenders Scott McLaughlin and Shane van Gisbergen in the Top 10 Shootout to grab pole for this afternoon's Supercars finale in the streets of Newcastle.

Reynolds came into the single-lap dash with third on the provisional grid, however a 1m10.567s proved too much for the title contenders to overcome.

That means Reynolds claims the final pole position of the 2018 season, putting him next to Scott McLaughlin and immediately ahead of Shane van Gisbergen for the start of today's 95-lap race.

“I told everyone I was going to give it all I had and that’s all I had,” he said.

“I couldn’t care less [about the championship fight]. It’s all about trying to win today and give the boys a reward going in to Christmas.”

McLaughlin will start on the outside of the front row with van Gisbergen on the inside of the second row, which could be crucial given how the right side of he road seemed to provide the faster starts yesterday.

Garth Tander was the big winner of the session, despite running first through some Turn 1 debris and not having a set of greens.

The Garry Rogers Motorsport driver's 1m10.856s took plenty of beating, the likes of Lee Holdsworth, Jamie Whincup and Fabian Coulthard among those to be jumped by Tander as he secured fourth, his best qualifying result of the season.

"We changed the car for the race yesterday,” he said.

“We were miles behind, we got damage and had to change a steering arm, but for the last stint we were tracking ourselves versus McLaughlin and van Gisbergen and our pace was basically the same as those guys.

“It felt like we had a strong car and after a couple of small changes overnight, we found ourselves in the Shootout, and it was a pretty good lap.

“It was a shame we lost some time with that junk down at Turn 1, but we’ll take fourth for sure.”

Despite losing out to Tander, Holdsworth still made gains of his own with a two-spot improvement on regular qualifying.

James Courtney and Whincup lost a spot each to end up sixth and seventh, while Tim Slade and Andre Heimgartner held position in eighth and ninth.

Fabian Coulthard had a six-spot slide to the back of the Top 10, thanks to a lock-up into Turn 11.