Shane van Gisbergen dominated the opening race at the Newcastle 500, as a late mistake from Jamie Whincup cost Triple Eight a one-two finish. 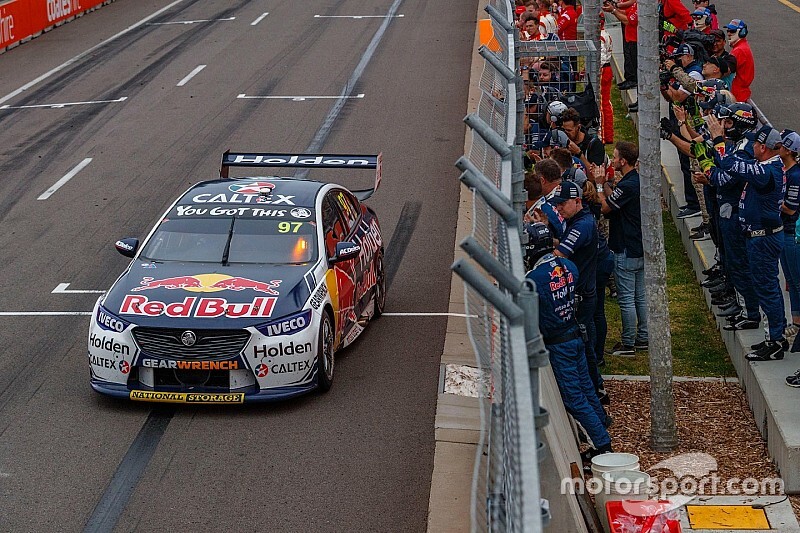 Van Gisbergen executed a perfect drive from pole, running deep into the first two stints before emerging with a healthy advantage for the run to the flag.

The race was almost a Triple Eight cakewalk too, only a mistake from Jamie Whincup stopping the factory Holden squad from a dominant one-two.

Instead it was DJR Team Penske that ended up with two drivers on the podium – and one hand on the teams' title – with Scott McLaughlin second and Fabian Coulthard third.

It was the perfect start for the two Red Bull Holdens, van Gisbergen forcing McLaughlin just wide enough into Turn 1 that Whincup could get a run into Turn 2.

With Whincup as rear gunner and few passing opportunities anyway, the leader was in no hurry as the race settled into its first stint.

McLaughlin didn't stay bottled up behind the Red Bulls for long, the Penske driver pitting on Lap 7 before resuming in clear air.

The extreme undercut meant McLaughlin jumped Whincup when the latter stopped on Lap 16, the Shell Mustang initially holding a four-second advantage. That was swiftly cut to nothing, Whincup parking under McLaughlin's rear wing for the second stint.

On Lap 32 McLaughlin became the effective leader, van Gisbergen dropping behind both him and Whincup after finally making his first stop.

With Whincup unable to find a way past McLaughlin, the seven-time series champion let his teammate through on Lap 44 to have a crack. Van Gisbergen couldn't get it done either, McLaughlin retaining the lead until making his second stop on Lap 50.

Whincup covered McLaughlin off a lap later, using his fuel advantage from the opening stop to emerge well clear of the Penske Ford. The Triple Eight one-two was then restored when van Gisbergen made his second stop on Lap 64, emerging with 4s over Whincup and almost 9s over McLaughlin.

The factory Holdens looked set to cruise to the finish in that order, which would have slashed DJR Team Penske's advantage in the teams' championship to just 77 points. But that was dashed by a costly mistake by Whincup on Lap 75, a trip down the Turn 7 escape road dumping him back to seventh.

That helped McLaughlin back into second, although he had no answer for runaway leader van Gisbergen, the gap 10s at the finish.

"Awesome day for us," said van Gisbergen. "[It's a] shame about Jamie [Whincup] making a mistake there, that would've been great team points.

"Thanks to the guys, the car was awesome. I had a cool start, good battle and then forced our way through, so pretty cool."

Whincup's mistake promoted Fabian Coulthard to third, his first podium finish since the Townsville round back in July. Having both DJRTP drivers on the podium also swing the teams' title fight well into the Shell squad's favour, the gap 143 points with just one race to go.

David Reynolds finished fourth ahead of Cam Waters, while Scott Pye was the star of the race with a remarkable charge from the very back of the grid to finish sixth. The Walkinshaw Andretti United driver started at the back thanks to a qualifying crash earlier today, his recovery including impressive moves on the likes of Whincup and teammate James Courtney in the closing stages of the race.

"I needed to right that wrong from qualifying," said Pye, who was hospitalised yesterday with illness before returning to action today.

"I wasn't gutted, but it was really disappointing. I needed to capitalise on it and I had so much fun. I felt good the whole time which was nice, especially after the last couple of days – I felt like I was going to die yesterday.

"It was an awesome, fun race and it felt good until the end, so I was able to push. I couldn't believe it, I actually thought the guys hadn't pitted in front. It was going better than I thought it was and our pace was really good at the end, so I just kept pushing and pushing right to the flag. Couldn't quite get Cam [Waters], but I gave it absolutely everything to the flag."

Whincup couldn't find a way past Courtney and had to settle for eighth, fellow Holden drivers Tim Slade and Mark Winterbottom completing the Top 10.

Pye woke up in hospital before stirring drive