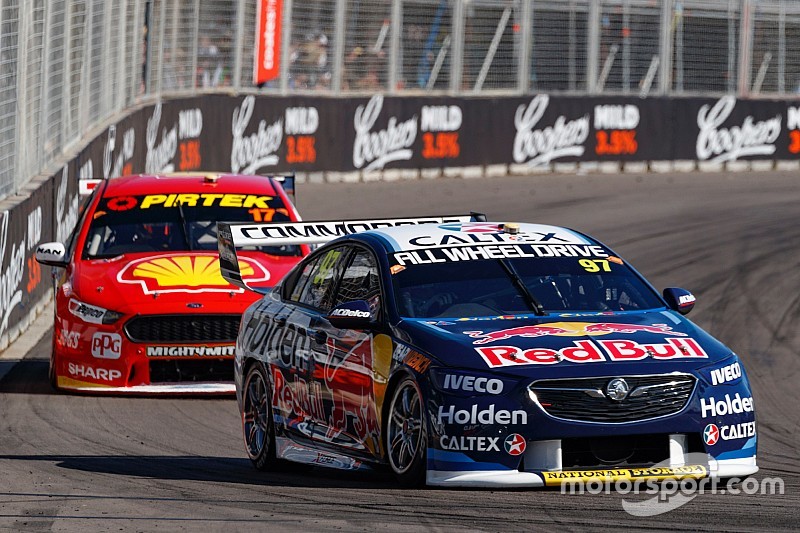 Shane van Gisbergen will go into the final day of the Supercars season just two points behind Scott McLaughlin, after trumping the Penske driver with a last-lap pass on the streets of Newcastle this evening.

The title contenders both led the race at various points, a crash from McLaughlin's teammate Fabian Coulthard wresting control from van Gisbergen and handing it to McLaughlin midway through the 95-lapper.

However it was van Gisbergen who came out on top thanks to a thrilling final lap, McLaughlin lucky to even get to the finish after nearly running out of fuel as the Red Bull Holden swept through to take a stunning win.

The result means the pair will head into tomorrow's finale separated by just two points.

It was the teammates that made the better start to the race, Jamie Whincup charging into a Lap 1 lead over van Gisbergen, as Coulthard demoted McLaughlin to fourth.

It didn't take long for team orders to come into effect, though, with Whincup letting van Gisbergen into the lead at Turn 2 on the second lap before Coulthard moved over for McLaughlin moments later at Turn 11.

The strategy games continued once the position swaps had been executed, Whincup immediately backing up the Penske Fords to allow van Gisbergen to sprint into the lead.

Coulthard kicked off the first round of stops for the leaders on Lap 7, which meant he was out of bottle-neck being created by Whincup. McLaughlin, however, had to just sit behind the second-placed Red Bull Holden, 5s back from van Gisbergen, until Whincup pitted on Lap 17.

Thanks to his rear-gunner antics Whincup came out behind Coulthard, but with better tyre quality quickly caught the #12 Penske Ford. That led to a tangle of the sacrificial lambs, Coulthard escorting Whincup into the Turn 12 wall as he tried to get past on Lap 23.

The leaders made their first stops on Lap 25 (McLaughlin) and Lap 26 (van Gisbergen), the Penske driver taking on less fuel to close down that gap from the first stint. It resulted in the pair running nose-to-tail for a number of laps, McLaughlin tapping on van Gisbergen's rear bumper as he looked for a way past.

On Lap 42 the race was changed completely when Coulthard fired into the Turn 1 wall, Nick Percat then swiping the back of the stricken Falcon.

The subsequent Safety Car caused chaos in pitlane, and cost van Gisbergen the lead. While McLaughlin was able to take on the remainder of his 140 litre fuel drop in one go, van Gisbergen had to cycle through the lane twice, which left him running seventh.

To add to Triple Eight's woes Whincup was left without having met his 140 litre requirement, while Craig Lowndes was left stuck in the garage after clipping the back of Scott Pye's Walkinshaw Holden in the crowded pitlane.

The race restarted on Lap 48, van Gisbergen swiftly up to fifth after passing Michael Caruso, and then having Lee Holdsworth taken out of the equation with a drive-through for a restart infringement.

There was a scary moment for the Kiwi on Lap 54, though, David Reynolds locking up and tagging the back of the Red Bull Holden at Turn 11.

With no lasting damage, van Gisbergen turned fifth into four on Lap 57 when he passed Simona de Silvestro into Turn 2.

When Chaz Mostert tagged the Turn 1 wall on Lap 63 van Gisbergen moved back into the podium spots, before third became second when Pye pitted on Lap 76.

By that point van Gisbergen had closed the gap to McLaughlin down to 7s, however with the Safety Car having fallen earlier than the critical lap for fuel, the back end of the final stint turned into an economy test.

That made it difficult for van Gisbergen to mount an aggressive charge until he felt he was clear to get to the end, which came inside the final five laps.

With McLaughlin still needing to conserve, van Gisbergen was able to close up on the back of the Falcon midway through the final lap. And when McLaughlin all but ran dry at Turn 11, the second last corner of the race, van Gisbergen could charge through to take an unlikely win.

“I don’t have much voice, there were so many words coming out of my mouth then. That was awesome,” said van Gisbergen.

“What a race. I could see Scotty was really charging. It was awesome, just two teams fighting hard.

McLaughlin did manage to finish second, having basically rolled across the line with no fuel on board.

“I didn’t actually think we were that close [on fuel],” he said.

“I thought we were pretty good there for a while and then it started to get a bit more intense with the call on the fuel.

“I was minimising blips and all that stuff, but sometimes you just don’t have another. We’ll debrief tonight and come back stronger tomorrow."

Reynolds finished third ahead of Whincup, with Pye, Mark Winterbottom, and James Courtney next in line.

After lengthy repairs thanks to his clash with Pye, Lowndes managed to get back on track and limp to the end of his second-last race as a full-timer. He was classified 23rd, seven laps down.