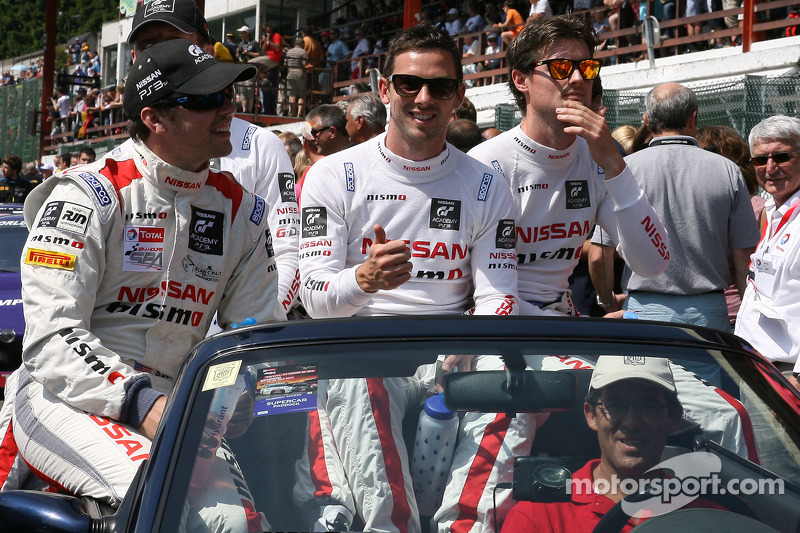 Nissan Motorsport’s hard off-season work has been rewarded with a solid outing in the official V8 Supercars test at Sydney Motorsport Park.

All four Nissan Altima V8 Supercars finished the rain-interrupted day inside the top 10, with the Jack Daniel’s pair of Todd and Rick Kelly clocking the second and third fastest times.

The Norton Nissans of Michael Caruso and James Moffat completed proceedings in an encouraging eighth and 10th place respectively.

While the focus for Nissan Motorsport was on gathering as much data as possible on the 2014-specification aerodynamics package, the team found time to give Nismo Athlete Alex Buncombe his first laps inside a V8 Supercar. 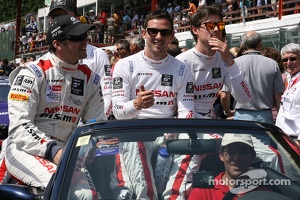 Fresh from his Australian race debut in the Bathurst 12 Hour for the Nismo Athlete Global Team last weekend, Buncombe remained in Australia to get a sample of the Nissan V8s, driving Todd Kelly’s #7 Altima.

While his track time was kept at a minimum, Buncombe impressed the team with his immediate speed.

The start of the Sydney test was hampered by heavy rain showers, however, clearing Sydney skies allowed for at least five hours of solid dry weather testing.

While the four drivers were pleased with the new-for-2014 package, they all say that the true test for the Altima’s pace compared to its rivals will come at the Clipsal 500 in Adelaide, to be held in two weeks time.

“It was fantastic, I can’t stop smiling,” said Alex Buncombe

“The test with Nissan Motorsport was a great experience. Although I only had a couple of runs at it, I did a stint on wet tyres and some laps on slicks, so it gave me a good idea of what these cars are about.

“It’s certainly hard to get used to, considering my background in European racing, but I think with a few more laps I’d be on the pace.

“This has really wheat my appetite for some more V8 Supercars racing. I really want to come back and do Bathurst again, whether that’s in the Altimas or the GT-R (for the 12 Hour).”

“It’s very early days at the moment, obviously we are trying to find out what the aero package is doing, and do some worthwhile running,” said Rick Kelly.

“Unfortunately it’s been a bit wet, but it’s been good for us. We rolled out at the Grand Prix in 2013 and were really quick in the only wet race of the season.

“We tried some things in the wet, and the car was really pacey, so that was good.

“Considering the weather, it’s a pretty impressive turnout (at the test day), everyone is having a look around the back of the pits, and the grid walk at lunch time was a great success as well.

“There’s been very good support for us so far in the second year of Nissan in V8 Supercars, and we can’t wait to see that support continue at the Clipsal 500.”

“All of the cars have been completely stripped down, back to a bare shell on the jig in the workshop, and rebuilt from scratch for the start of this season,” said Todd Kelly.

“The first run this morning you expect one or two little teething problems, but all four cars were spot on. They also seemed to be quite fast.

“We’ve had both wet running and dry, and in both scenarios, we seem to have a few cars up at the top, so we’re looking good.

“It’s a little bit hard to tell (if the aerodynamic changes have made a difference), we don’t get any sector times or speed trap times like we would at a race meeting.

“The only data we can get is physically standing on the pit wall and listening when the other cars are changing gears, and looking at overall lap time.

“Both of those don’t look too bad, we really need to get to Clipsal and the Grand Prix to see where we really sit, but I’m pretty confident that we’re better than we were last year.”

“It’s great to be back inside the car. After two months out of driving, it’s great to get back in the old girl,” said Michael Caruso.

“We have the brand-new aero package, so it has been important for us to assess where we are at.

“This test will definitely help us. After testing so much at Winton, it’s great to get to a different style of circuit. It’s high speed here, you build your confidence up through Turn 1, which is similar to the dreaded Turn 8 in Adelaide, so it’s good to get in, shake off the cob webs and set us up for the new year.”

“It’s was great to get back in the car for the first time since last year,” said James Moffat.

“Obviously the weather wasn’t kind to us in the morning, so that was a little frustrating. With all the aero changes we’ve had in the off-season, I’m glad we had some dry track time for us to really see where we are with the new-spec Altima.

“Compared to the other cars, our cars seemed very fast in the wet conditions, which was very encouraging.

“It has been a great team effort by all of the Nissan Motorsport and Norton Hornets team to get us out here and running around strong.

“We feel that this package will be better for us, compared to last year, but the true test will come in Adelaide in a few weeks.”