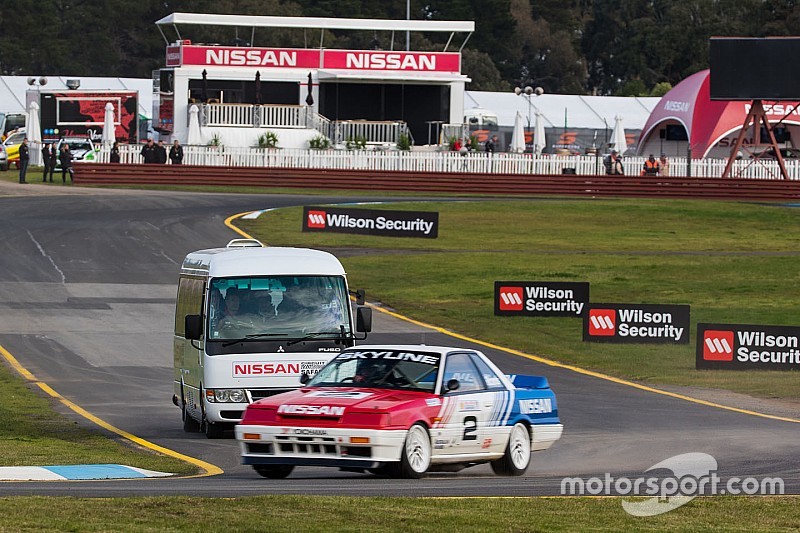 Nissan will look to bolster its Circuit Safari concept in Australia with more cars and more tracks, after successfully trialling it at the Sandown 500 last weekend.

The Circuit Safari concept is based around having buses full of passengers circulating at the same time as racing cars, offering a unique perspective of the cars at full racing speed.

The idea is well-known in Japan, having been used by both Super GT and the NISMO Festival in the past.

Last weekend it made its debut in Australia, Nissan arranging for five heritage cars to hit the track alongside three buses. The cars were a pair of GTR-S H31s (one of which was driven by Aussie Touring Car legend Jim Richards), a pair of Group A GT-Rs, and a genuine ex-Le Mans R88C sportscar.

The Safari field also included the four Nissan Altima Supercars during Friday’s running, before the race schedule ruled those cars out for the remainder of the Safaris across the weekend.

Having now been through the process once, and having it gone so smoothly, Nissan is confident of more Safaris in the future.

The trick, however, is finding circuits that are suitable for the speed difference between a bus and a racing car.

“Everyone that we’ve spoken to, from CAMS and Supercars to the people on the buses, really enjoyed it. Most people don’t get the opportunity to be on the race track with racing cars.

“[Sandown] is the best venue for it, because the line of sight is simple. It’d be great to do something like this at a street circuit, like in Adelaide, but the reality of that is that it’s too dangerous. You’d have to slow the cars down so much that it you wouldn’t get the full effect.

“Having cars so close to the bus at that speed, it’s great. The guys at Supercars worked hard with CAMS, and to their credit they said yes and let us go ahead. In the first session, the Kelly boys were having a go in their cars, and we thought there might be some commentary around that, but they were really comfortable with how it ran.

Wiley added that he’d also look to add more cars to the roster at future events to help boost the spectacle.

“We’re really happy and impressed with how it worked and I know Supercars is happy – but there’s definitely learning that’s come out of it,” said Wiley. “Having the Altimas on track and making it work with the scheduling I think is important.

“That first session, with all four Altimas, had something different.

“We’d like to get hold of some more heritage cars as well. It was just how the timing fell; we wanted to get one of the Bluebirds, but just because of where they were in their maintenance schedule we couldn’t. But if we do this again, I’d like to think we could have another six or seven heritage cars on track.

“I think the right number for somewhere like Sandown is between 10 and 14 cars, so people can listen to the commentator about what the car is, but there’s not too much dead time.”

The Circuit Safari wasn’t just a new experience for the passengers, with the drivers having to adjust to idea of dicing with the buses.

According to Wiley, the feedback from all involved – including the Nissan Supercars drivers Todd and Rick Kelly, Michael Caruso, and Simona de Silvestro – was glowing.

“The briefing session was one of the most interesting driver briefings I’ve ever been to! The drivers were being told where they could and couldn’t overtake the buses, and everyone had a giggle at that,” he said.

“The Altima drivers were blown away, because I’m not sure they expected to get much out of it. Then they got out of the cars and the Kellys, Caruso, Simona, they were all blown away by how much fun it was trying to get close to the buses.

“And the guys that were driving the heritage cars, Jim Richards was getting amongst it in the HR31. They really enjoyed it. And as the sessions went by they got more confident with how they could position the cars around the buses.

“You could see their confidence grow.”