James Moffat and Taz Douglas were the best of the Nissan Altimas in 18th place after a trying day.

Nissan Motorsport has finished the 2013 Bathurst 1000 with a pair of top 20 results in its return year to ‘The Great Race.’

James Moffat and Taz Douglas were the best of the Nissan Altimas in 18th place after a trying day. The #360 Norton Nissan was hampered by handling issues early in the race, while an engine mapping problem hampered the car’s speed.

Moffat completed the race on the lead lap – a trying result for the Altima’s first attempt at Mount Panorama. 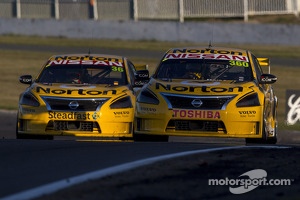 Kelly and Reindler chipped away for the 1000km, with no major issues or mistakes. They also completed the race on the lead lap.

The #300 Altima of Michael Caruso and Daniel Gaunt was also running with its sister cars, only for a power steering problem to hamper its progress.

Worse, though, for Todd Kelly and David Russell. Running in a strong position in the first hour of the race, Russell struck a stray kangaroo on the circuit. The incident broke the cross member, ruling the #7 Jack Daniel’s Altima out after 22 laps.

The next event on the V8 Supercars Championship calendar will be in Queensland for the Armor All Gold Coast 600 in two weeks time.

James Moffat, #360 Norton Nissan Altima (Bathurst 1000 result: 18th / Championship position: 14th): “It was a tough old day, and far from ideal. Being the first finishing Nissan in 18th is a statistic that, in the grand scheme, means very little,” said James Moffat.

“We had a massive battle on our hands the whole day. The chassis balance wasn’t great to start with, but we slightly improved it throughout the day.

“As we all know, our straight-line speed isn’t the best in the field, but we seemed even worse off today due to a mapping issue which made the drive-ability out of the slower corners very hard.

“I was holding onto it for dear life, so it was pretty disappointing to go all that way and finish 18th. It’s tough to swallow.

“We move from here to the Gold Coast and we need to regroup as a team and perform much better than that.”

“Personally, it’s the highest I’ve ever finished at this race, so that is nice, but it was a tough day.

“Right from the first stint, we had engine dramas. We know we struggle in that department, but it was worse than what it normally is. I was just getting passed down the straight and they could do it comfortably. My middle stints, I think they sorted the mapping issues, but once they got close enough, we were venerable.”

Rick Kelly, #15 Jack Daniel’s Racing Nissan Altima (Bathurst 1000 result: 19th / Championship position: 15th): “That was one of the fastest races I’ve ever seen around here, we pushed all day and the team did a great job, Karl did a great job, everything went to plan, we just didn’t have the straight line pace and the outright pace that we needed,” Rick Kelly said.

“We weren’t in the battle at the front, but we were in the battle up the back all day. We gathered some points and with the straight line deficiency we’ve got, I think that was all we could have hoped for from here.

“I think when you look back on the day and the weekend, probably the five key things you need to win Bathurst, the team’s got at least three of them, and the things we haven’t got, to a large extent, are out of our control.

“I’ve got to be satisfied; the team did a great job all weekend.”

Karl Reindler, #15 Jack Daniel’s Racing Nissan Altima (Bathurst 1000 result: 19th): “We knew it was going to be a long day for us, but Rick and myself worked on the car throughout the day and towards the end of the race we were pretty happy with it,” Karl Reindler said.

“We finished on the lead lap, so I think we have to be happy, we really didn’t put a foot wrong at all throughout the day, no mistakes, and with the equipment that we had today, we drove the perfect race.

“The strategy was good, so credit to the team, we had two Nissan’s finish Bathurst, which is a great attempt considering one of them was taken out by a kangaroo.”

“I had some very good pace, but particularly on my car, we had a number of mechanical dramas and problems all the way through the weekend.

“We need to rectify those problems, because as we know at the Gold Coast, it’s hot, there’s concrete walls, lots of attrition, and 300km around there is a long way to go. Plus, you have to do that two days in a row! We need to make sure we’re finishing races, and don’t like to finish when the equipment lets you down.

“I know the guys will do their absolute most to put us in the best position heading into the Gold Coast.”

Daniel Gaunt, #300 Norton Nissan Altima (Bathurst 1000 result: 25th): “I got out at about 95 laps and I thought my day was done, but I ended up doing another 150km after the team fixed the power steering problem,” said Daniel Gaunt.

“By that stage, we were many laps down, but it was good to get a few extra laps in the Altima ahead of the Gold Coast race.

“We were running nicely with the other Nissans. They all finished on the lead lap, so without our dramas, I think we could have finished inside the top 20.”

“To not even having turned a race lap is pretty tough to get your head round, so need to forget about this year and try and gather our thoughts back up for the next few races and for Bathurst next year.”

David Russell, #7 Jack Daniel’s Racing Nissan Altima (Bathurst 1000 result: DNF): “I’m absolutely gutted to be honest, we’d done the first stint and were in to the second and our engineer was keeping me updated saying our pace was good, keep pressing on,” David Russell said.

“I went up through Turn 2 and just up to when I was about to pull fourth gear I just caught it out of the corner of my eye, but skippy jumped out and I had a split second to try and do something, but I wasn’t going to swerve and put the car in the wall to avoid it.

“It just happened so quickly and I just can’t believe our luck, I just feel for Nissan and all our sponsors, Jack Daniel’s, and I feel for Todd, he didn’t even get a run today. This will remain with me for a while, that’s for sure.”