Tomorrow, the Nissan Motorsport will be on track at 10.05am AEST for practice, while on Sunday, a final practice will be held at 7.25am ahead of ‘The Great Race’ at 10.30am.

Nissan Motorsport has toughed it out in qualifying for the Supercheap Auto Bathurst 1000 – the car maker’s return year to Mount Panorama.

After an encouraging lead-up that saw Michael Caruso finish fifth in the final practice session, the #300 Norton Nissan Altima was only able to take 17th place on the grid, the best of the four factory Nissan entries. 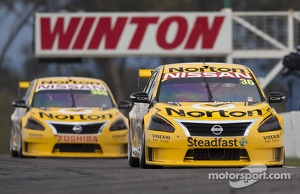 Caruso was disappointment with the result, given that he sat inside the top 10 for most of the session.

James Moffat will start 19th and said that he was happy with the balance of his #360 Altima, yet couldn’t find anymore time on the track.

The Jack Daniel’s Altimas cars of Todd Kelly/David Russell and Rick Kelly/Karl Reindler will start 23rd and 24th respectively and are looking to move forward in the 161 lap race.

Tomorrow, the Nissan Motorsport will be on track at 10.05am AEST for practice, while on Sunday, a final practice will be held at 7.25am ahead of ‘The Great Race’ at 10.30am.

“I had the car sitting inside the top 10 for most of the session, and after finishing fifth in the final practice, you can’t but help get your hopes up. I thought we’d be a shot, so 19th isn’t exactly where we wanted to be.

“We have another big practice session tomorrow, so we can use that to focus on the race pace of our Norton Hornet. We’ll see where that puts us.

“Sunday is a long, long day, but I really wanted to make the shoot-out. It would have been special, not just for me but for Nissan in its return year.”

“In that first part of the session, it was looking good. We were deep inside the top 10, and I guess Michael got up to speed as quick as he could. It’s a shame there wasn’t anything left for him.

“We’re just loosing too much time in the first and last sectors. Across the top, the chassis is really good. 17th is better than being in the 20s.

“Given all the crashes we’ve seen, I think it will be a race of attrition. If we do everything right on Sunday, I think there can be a result for us.”

James Moffat, #360 Norton Nissan Altima: “It is disappointing to qualify 19th for the biggest race of the year. If you want to be in the top 10 at any race, it’s here at Bathurst,” said James Moffat.

“There really wasn’t much left in the car. I was putting it all on the line, but wasn’t prepared to shorten the thing by three feet, like some others have done this weekend.

“Having said that I was 10 tenths the whole session. We struggled in a couple of key corners with our car balance that knocked the car around, and on my last set of tyres, it was a bit of a messy lap.

“When the old adrenaline kicks in, you try and drag the car to places it doesn’t want to go and you end up losing time, rather than gaining it. I’m a bit dirty on myself for that, but we still have some work to do.

“Encouragingly, we’re quick in the middle sector, across the top. We’ll spend tomorrow morning and Sunday morning tuning it into a good race car and then see what the race brings for us.”

“All of the Nissan guys were putting it on the line, and unfortunately, I think that’s all it had.

“The important this is that we have a good race car and it’s along day. As they say, anything can happen.”

Todd Kelly, #7 Jack Daniel’s Nissan Altima: "That's all I could get out of the car, we made a little change for the last run and it gripped the car up a bit and picked up four tenths, but it just wasn't enough to move up the field," Todd Kelly said.

"The car is quite comfortable to drive; it just didn't make use of a green tyre very well, so I think we've got a pretty good race car.

"I'd normally be pretty cut up about where we are, but first year here and the fact that we know we can plug away in the race if the car is good to drive and end up somewhere. Qualifying is out of the way now, so we can focus on the race."

David Russell, #7 Jack Daniel’s Nissan Altima: "For us, it's important to focus on a race car that we can keep belting out consistent times in on Sunday," David Russell said.

"The biggest thing for us will be to make sure the car looks after its tyres and we can be comfortable in the car and put in some good stints."

Rick Kelly, #15 Jack Daniel’s Nissan Altima: "It's almost a little bit of a relief to get qualifying out of the way, we've been trying to tune the car for speed and we just weren't able to get it where we needed across the top to a certain extent and with the pace we're losing up the straights, it ended up being a tough session for us," Rick Kelly said.

"We can happily move our focus away from that to a solid race car and start to do some fuel conservation and get ready for Sunday.

"That's what's most exciting for me, I'm not a huge fan of qualifying around here, because it's pretty risky, so I'm excited to be able to focus on the race now."

Karl Reindler, #15 Jack Daniel’s Nissan Altima: "We've been working on race balance throughout practice and it's been a big part of my role thus far," Karl Reinder said.

"I've been quite happy with the car in my sessions; it's going to be a very raceable car. Clearly we've got some straight line issues, which is a big part of where we qualified, but it is a long day on Sunday and although we'd like to be starting further up, it's not the case, and I know we'll have a strong car in the race, so it should make life a bit easier."

Bright confident but who will beat Jamie Whincup?