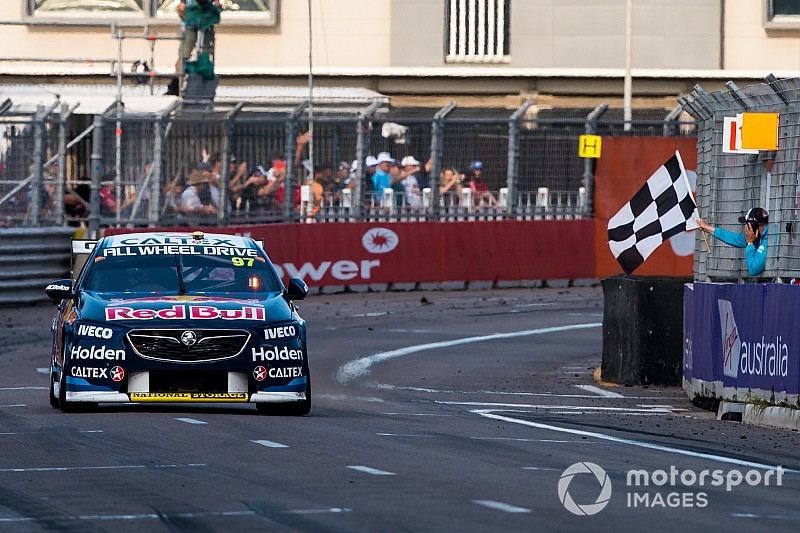 Shane van Gisbergen says his post-race penalty this morning deflated what could have been the "most epic finish in history".

Following a thrilling win on Saturday which left the title fight on a knife-edge, van Gisbergen was this morning slapped with a 25s post-race penalty that dumped him to fifth in the standings for a pitstop infringement.

The penalty meant McLaughlin only needed to finish sixth or better today to seal the title, that job made easier when van Gisbergen struggled to show any form of front-running pace throughout the 95-lap finale.

While in the simplest terms the penalty didn't affect the outcome, van Gisbergen admits there was a deflating element to the stewards' decision to go for a time infringement rather than something like teams' championship points.

He says the penalty didn't just give his motivation a hit, but changed the entire atmosphere of the event.

"It just felt like it got taken out of our hands," said van Gisbergen.

"It’s a shame and it’s been talked about a lot, it was just bizarre to have a penalty like that as a driver penalty for something like that.

"I was still giving it everything on track, but not only in the garage, the whole place felt like the buzz was gone.

"We were set up for the most epic finish in history and looking forward to the battle, and it just felt like we’ve got to win and they’ve got to stuff up.

"The excitement just got pulled out of the place, everyone in the garage, but also all the fans.

"It was so shaped up to be an epic weekend, it was awesome, even on the grid yesterday we were side-by-side, together the whole weekend.

"It was just a really weird feeling between everyone this morning."

The Kiwi added that he was surprised to receive a time penalty, given that another similar offence – namely Anton De Pasquale in Adelaide back in March – resulted in a fine and a loss of team's championship points.

"When I saw the footage, it was obvious we’d have a penalty," he said. "But they saw the exact same things this year even, and it was points and a fine.

"They’ve never come up with a driver penalty before. We had to accept it, but it was tough."

Triple Eight boss Roland Dane also admitted there was a demotivating affect from the penalty.

“Honestly, it affected all of us, it was totally demotivating,” he told TV crews after the race.

“We had absolutely no problem being beaten in a fair fight by Scotty McLaughlin and his crew, but to be beaten by poor decision making in the officials area of the sport, which was nothing to do with Shane.

“You saw in that race just now, there was a pitlane infringement and the team got a penalty and that's what should have happened yesterday, if it was an infringement.

“Shane had every right to feel demotivated, to be honest, as the team did, the wind was taken out of our sails, which was a great pity. “