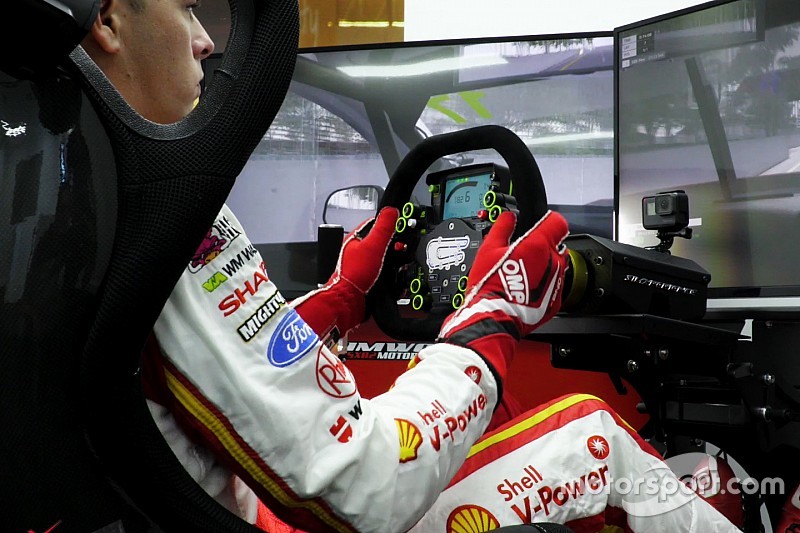 DJR Team Penske has introduced a full-motion simulator into its programme, to help Scott McLaughlin and Fabian Coulthard fight for this year's Supercars title.

The front-running Supercars outfit has teamed up with Simworx to set up a hydraulically-operated Simworx SX02M V2 Pro Motion simulator at its Queensland factory, aimed at giving McLaughlin and Coulthard seat time in between race weekends without breaking Supercars' strict testing regulations.

“The feedback coming though the steering wheel, the way the pedals and gearshift feel genuinely mimics the real thing,” said points leader McLaughlin.

“Combined with the motion force through the hydraulic system, you can get a genuine feel for how the car might be handling around a particular circuit before we even get on the plane.

"It allows me to get my eye in before hitting the track, and that’s awesome when the field is separated by tenths of a second.”

The team's simulator programme started after the Australian Grand Prix in March, DJR Team Penske drivers having won five of the eight races since then.

That, says Coulthard, is no coincidence.

“Having tools like this simulator in our possession means that we are heading to the track with laps under our belts and a feeling of preparation that we’ve not previously had,” said the Winton race winner.

“We took delivery from Simworx just after the Grand Prix, and our on-track pace has really come on from there. I think that being able to simulate on-track scenarios has definitely assisted our performance at each event.

While simulator work in an official sense is still in its infancy in Supercars, there has been an increase in virtual training over the past couple of seasons.

A number of drivers have been spending time in a Motionforce 1 full-motion sim currently operating out of Carrera Cup team McElrea Racing's HQ in Queensland, while Erebus Motorsport has set up an identical unit at its Melbourne workshop for David Reynolds and Anton De Pasquale.

'Light at the end of the tunnel' for embattled Nissan outfit