Coates Hire driver Nick Percat didn’t put a foot wrong all weekend at the Armor All Gold Coast 600 street circuit, to win his first Porsche Carrera Cup round and finish second in the 2013 championship. 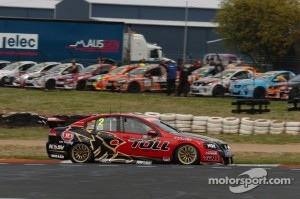 “This is probably the most important pole position of the year to get, as it’s a staggered grid” said Percat after qualifying. “The start will be crucial. I haven’t made many good starts, but hopefully the staggered grid will help me get to turns one, two three in the lead and then I can put my head down and try and press on”.

In the first of three races over the weekend Percat grabbed the lead on the last lap of the race to steal the win from Steven Richards who held the top spot from the start. Michael Patrizi came across the line in third. Reigning champion Craig Baird could have sealed this year’s crown but finished sixth, meaning he would have to wait until the following races over the weekend to claim the 2013 title.

It was Percat’s fourth win of the season in the Coates Hire car and elevated him to second in the championship. “It’s always great racing with Steven Richards,” said Percat after the race, “You always know that he races fair.

“We had a great battle and it was extremely hard to get past him for the win.  I've had pole positions and race wins this season, but I haven’t had a round win yet, so that’s my mission this weekend,” he added.

The second encounter, which had the safety car on track for five laps saw Percat and the Coates Hire Porsche take the chequered flag from Steven Richards with Shae Davies third and Michael Patrizi fourth.

The third and final race of the weekend saw Richards and Percat battle at the front once again with Richards getting the upper hand on Percat who chased him across the line to finish in second and seal his first round win.

Percat has enjoyed a standout first year with his scorecard showing five pole positions, five race wins and one round win.

Accepting the round win Percat said, “I have enjoyed every minute in the Porsche Carrera Cup Championship this year. It’s very professional and the racing is so much fun, as the cars are so even. I’d also like to congratulate Bairdo (Craig Baird) on his championship win”.

Reynolds breaks through on the Gold Coast