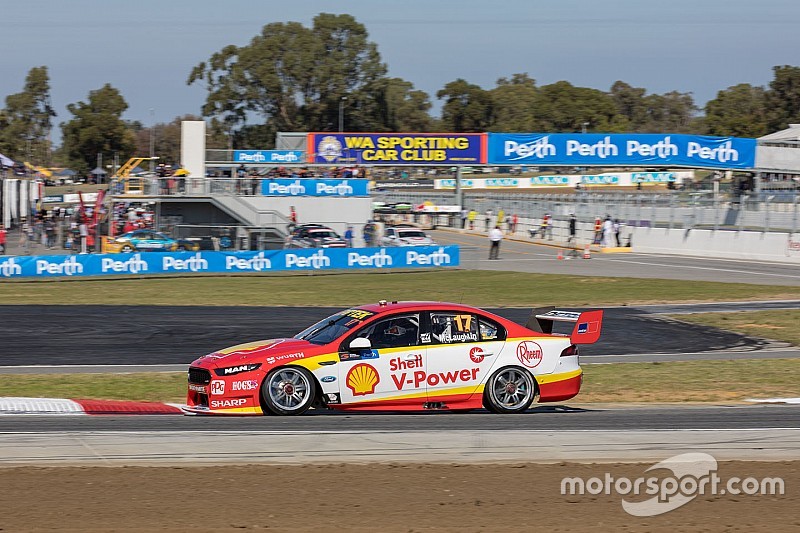 Scott McLaughlin finished Friday's running at Barbagallo Raceway as the pacesetter, while David Reynolds and Craig Lowndes both missed out on automatic Q2 spots.

It was a relatively slow start to the session, the likes of Shane van Gisbergen and Reynolds sitting on top with times in the mid-56.1s, just above the cut-off time required for those still looking for a spot in the combined Top 10.

McLaughlin then went quickest right on the midway point of the session, although his 55.988s could have been better had he not locked up at the last corner.

With just over a quarter of an hour to go both Fabian Coulthard and Rick Kelly moved into the combined Top 10 for the first time with the first and second quickest times, Coulthard with a 55.879s and Kelly with a 55.962s.

Three minutes later Chaz Mostert did likewise, charging to the top with a 55.631s, to that point the quickest time of the day.

The next wave of quick times came with five minutes to go, rookie Jack Le Brocq backing up his Top 10 with a 55.463s to go fastest before Scott Pye moved ahead of him with a 54.887s.

Then, with just over four minutes to go, McLaughlin pulled his favourite trick, decimating the field with a 54.887s to go 0.5s clear.

The gap did come down thanks to come late improvements, Cam Waters closing to within 0.01s on his final run, but nobody could beat one-lap superstar McLaughlin.

"I kept stuffing up the third sector all day," said McLaughlin.

"I really didn't get a nice banker before that lap, so I was pretty nervous that whole green tyre lap. If I made a stuff-up I was out.

"I was just trying to bring it home, I think there's a lot more in myself. It's just nice to be in the 10, I'm stressed out with this qualifying system. It's full on."

The final three minutes of the session determined the rest of the automatic Q2 qualifiers behind McLaughlin.

Waters was comfortably second, while Coulthard improved to a 55.034s on his last run. Jamie Whincup popped up into fourth at the end, while the absolute standout rookie was Anton De Pasquale, who was fifth quickest with a 55.197s.

Mark Winterbottom made up for missing the Top 10 in Practice 1 with the sixth quickest time, while Tim Slade was another driver to rescue his Q2 hopes in the second session.

Mostert slipped back to eighth, but still made it three Tickford Fords in Q2, while Shane van Gisbergen was ninth quickest after missing the 10 this morning.

Simona de Silvestro was the last driver to bank an automatic Q2 spot, with David Reynolds surprisingly missing out, finishing up on the bubble in 11th.

There were a few drivers who went from inside the Top 10 this morning to out of it this evening, including Practice 1 pacesetter Andre Heimgartner, who was just 21st.

Scott Pye and Lee Holdsworth lost ground too, while Craig Lowndes went from third this morning to last this evening after catching traffic on his best lap.

Rick Kelly, who was second quickest with a quarter of an hour to go, ended up down in 16th.

Everyone outside of the Top 10 will start with Q1 tomorrow.