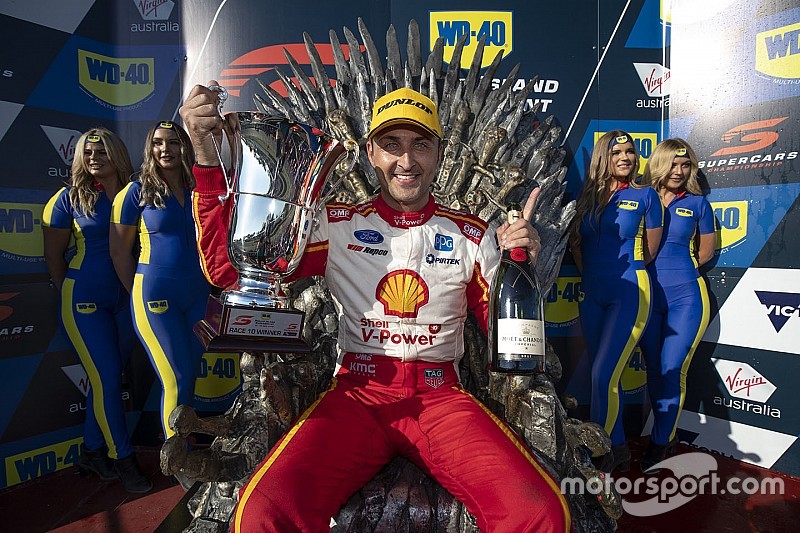 A slow first stop for McLaughlin proved to be the difference between the two Penske Mustangs, Coulthard taking over the lead for the second stint and never letting it go.

The win is Coulthard's first since the Sunday race at Winton last May, and restores the 124-point gap between the two Penske drivers in the standings.

The Shell Fords were untroubled off the line, McLaughlin quickly bolting to a 1.5s lead over Coulthard.

Thanks to new pitlane closure rules that are on trial this weekend, the first stint was over in the blink of an eye. McLaughlin pitted from the lead on Lap 5, the rest of the frontrunners coming on over the next four laps.

The stops shook the order up, with Tickford Ford drivers Chaz Mostert and Cam Waters ending up first and second on corrected order thanks to short fuelling. Mostert didn't even bother taking on new rubber during his Lap 7 stop, sticking with the same tyres he started the race with.

McLaughlin dropped all the way back to fifth in the effective order, with De Pasquale and Coulthard also jumping the reigning champion. That the two Penske cars were reversed was somewhat unexpected, given that Coulthard took on slightly more fuel than McLaughlin.

By the 15-lap mark, with Mostert 3s down the road, the battle for second was well and truly on between Waters, De Pasquale, and the two Penske Mustangs.

McLaughlin, still running fifth, took himself out of the battle by making his second stop on Lap 16.

Mostert and Waters both came in a lap later, followed by De Pasquale on Lap 18 and Coulthard on Lap 19.

Long stops for the Tickford drivers dropped them to back of that lead pack, both of them ending up behind teammate Will Davison.

Coulthard, meanwhile, came out in the effective lead. De Pasquale got out ahead of McLaughlin, but a mistake midway through Southern Loop on Lap 21 was all it took for McLaughlin to restore the Penske one-two.

At the midway point of the race there was little between the two Shell Mustangs, Coulthard's lead less than a second.

Nothing much changed at the front over the long final stint, the gap consistently hanging around the 1s mark before closing down to six tenths at the finish.

"I was a little bit shocked," said Coulthard when asked if he expected to jump McLaughin in the first round of stops.

“I’m not sure what happened to Scott on one of his out-laps, because I was expecting a red car to go blowing past.

“But thankfully we had great pitstops, we had a fast car, it looked after its tyres, it ticked all the boxes.”

McLaughlin added: “I’m really happy with my weekend, it’s been a big week for [the team], two weeks on the road and to come away with three one-twos is massive,” he said.

“We’ll have a little think about it in the debrief, talk about a few things, but the idea is for the team to win and we’ve done that on multiple occasions in this past couple of weeks.”

Despite a sensor issue causing some fuel consumption concerns, De Pasquale was a comfortable third, 4s behind Coulthard and 1.7s in front of Davison.

It's the second-year driver's first podium finish, coming a week after a bizarre bolt blunder cost him a career-best result in Tasmania.

“I had about 10 to go and [Davison] wasn’t going to catch me, but then they said save fuel and obviously that’s very stressful when you’re fighting for your first podium," said De Pasquale.

“You’ve got to save fuel and try and go fast, but in the end it all worked out and I think we’ll have a great night tonight.”

Davison led a Tickford trio in positions four to six, Mostert ahead of Waters, while Shane van Gisbergen came home best of the Triple Eight Holdens in seventh.

Rick Kelly won out in a fierce battle for eighth, which included a hard-charging effort from Tim Slade, who rolled the dice on a long middle stint and had the best tyre life in the closing stages.

The BJR driver couldn't quite nab that eighth place, though, settling for ninth after being made to work hard to pass first David Reynolds, and then teammate Nick Percat.

Jamie Whincup had a very quiet race, finishing up 12th behind Reynolds.

James Courtney had a shocker of a race, started by clumsy contact with Todd Hazelwood on Lap 1 as the pair battled over seventh place. That earned the 2010 champ a 15s penalty, insult then added to that injury with a high-speed off at Turn 1 on Lap 13 thanks to a front-right puncture.

There was then a second right-front puncture 10 laps from home, Courtney finishing up last, two laps behind the winner.

Hazelwood recovered to 16th after his involuntarily trip through the gravel thanks to that first-lap Courtney contact.