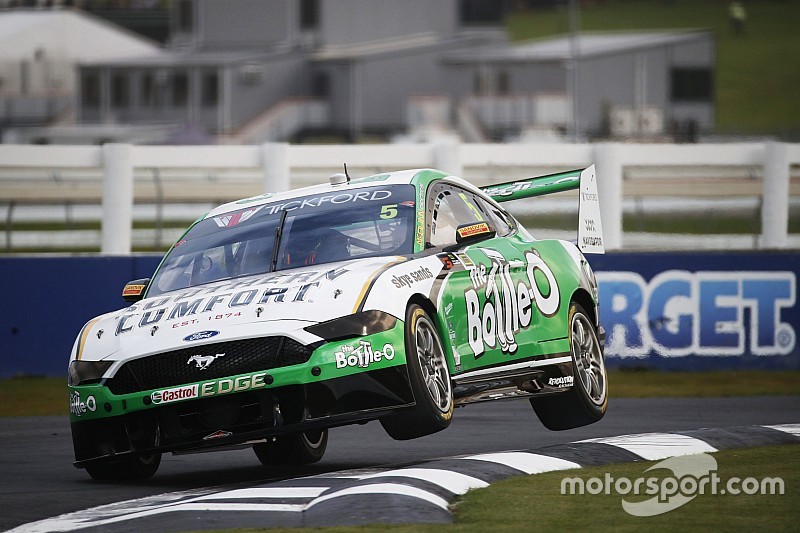 Practice 1 pacesetter Will Davison burst out of the blocks, going quickest with a 1m02.420s on his opening run.

That left him a couple of hundredths clear of Shane van Gisbergen and Holdsworth.

At the 10-minute mark Holdsworth took over at the top thanks to a 1m02.300s, Jamie Whincup and David Reynolds both improving at the same time to slot into second and third.

Whincup the went quicker again next time around, a 1m02.245s putting him five-hundredths clear at the top.

The next round of improvements came with two minutes to go, Will Davison becoming the first driver to break the 1m02s barrier in a Supercar with a 1m01.791s.

He was quickly displaced by Tickford teammate Holdsworth, who shifted the benchmark down to a 1m01.628s.

That time proved unbeatable, van Gisbergen getting closest with a 1m01.775s at the flag.

"It was lit. The car is good," said Holdsworth.

"We did some changes there and it really came alive. We came out with a pretty good base car, but we've been searching for that bit extra just to get us up into that top three, because we've just been outside of it.

Davison ended up third, ahead of David Reynolds, Nick Percat, Jamie Whincup and Scott McLaughlin, that entire group getting into the 1m01s.

McLaughlin, however, had a far from straightforward session. A starter motor issue robbed him of the first 15 minutes of running, leaving him little time to work on turn-in oversteer issues.

"Initially the turn is really good, but I don't have enough in the middle," said the points leader.

"The problem is, when it's been so good on the initial, I get quite loose. It's quite snappy on exit.

"We obviously didn't get as many laps as we wanted. At least we got back out, the boys were all over it. But doing those two laps, I was like 'far out'.

"I was holding on. It's hard work around here, and when you haven't had any laps it's even harder."