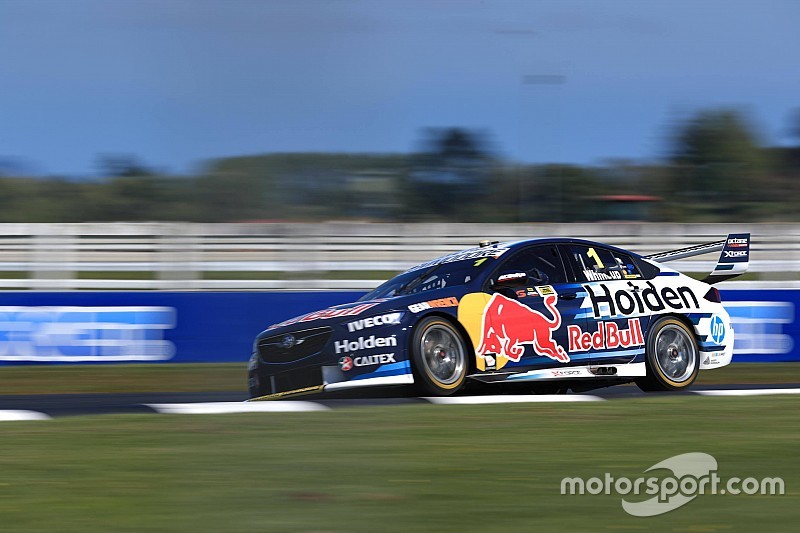 But it was a disaster of a session for title contender McLaughlin, who crashed out on his first run.

It all started with locked rears as he came into Turn 2, the Penske Ford bouncing over the kerb and into the wall on the outside of Turn 3.

McLaughlin made a promising start to the season, going quickest with a 1m03.580s on his first run. However his charge was over the very next lap thanks to that crash, which sparked the first of three red flags.

When the session restarted Scott Pye jumped to the top with a 1m03.258s, but it was only a brief patch of green running before a second red was called when Andre Heimgartner's Nissan was left stranded on the way into pitlane thanks to an engine sensor problem.

When running resumed Nick Percat went quickest with a 1m03.248s, that time standing until the third red flag arrived with 12 minutes to go.

This time it was Todd Hazelwood who stopped the session, the rookie sailing wide at the ultra-fast first turn, skipping through the sand trap and even nudging the wall.

With five minutes to go Tim Blanchard took over top spot, replacing BJR teammate Percat with a 1m03.131s. He was then pipped by James Courtney's 1m03.112s, before Rick Kelly became the first man of the weekend into the twos with a 1m02.928s.

Then, right at the flag, Whincup landed the hammer blow with a 1m02.657s to claim top spot – despite being in the spare T8 chassis due to his regular car being crashed on the Gold Coast.

"We had a programme, and we stuck to it," said the reigning champion.

"It wasn't that eventful for us. We just got through our plan, did our thing, and the car is pretty quick.

"I haven't driven this car before, so it took a bit of time to get used to it. But now it feels like home. We pride ourselves on engineering excellence, but you can just feel little differences here and there. And around this place you need to be at home, you need to be at one with the car.

"I was a bit timid at the start, because you can easily have big off here, but now I feel at home."

Reynolds ended up second followed by Tickford pair Winterbottom and Mostert, who both improved during the late flurry.

Pye made late gains to go fifth quickest, while Kelly dropped to sixth.

Richie Stanaway made a strong start to his home race weekend with the seventh quickest time, followed by fellow Kiwi Shane van Gisbergen and Craig Lowndes.

Tim Slade rounded out the Top 10, while Courtney and Blanchard ended up 11th and 12th having been first and second with 90 seconds to go.