Van Gisbergen has taken over McLaughlin's mantle as the dominant force in Supercars, the Triple Eight star currently on a six-race winning streak that includes last year's Bathurst 1000 and the first five races of the 2021 season.

He won three of those races with a broken collarbone and three broken ribs, too, including a stunning victory last Saturday when he went from fourth to first in final two laps.

A keen onlooker of the Aussie series as he prepares for his rookie IndyCar campaign, McLaughlin isn't convinced van Gisbergen's rivals are being aggressive enough when it comes to fighting for victories.

The reigning three-time champion wants to see the likes of Chaz Mostert and Cam Waters race van Gisbergen with the same enthusiasm that they race each other.

"I feel there needs to be a harder block here or there. A harder turn-in here or there," he said on the latest episode of his Balls & Bumpers podcast.

"Don't just give up the position so easily.

"Chaz and Cam race each other so hard, to the point that they're spinning each other out. And then when Shane gets in the mix, both of them don't do the same.

"I don't know. Me and Shane had some ding-dong battles. You have to stand up for yourself against Shane, he races you how you race him."

McLaughlin's comments follow a fierce rivalry between him and van Gisbergen across a number of years, which included memorable moments such as the park-in at Pukekohe in 2018 and a war of words in Townsville last year.

Leaning on his experience, McLaughlin added that beating Triple Eight is all about pressure, highlighting his title-winning 2018 season as an example of pushing the powerhouse team into mistakes.

That was the year McLaughlin, in the ageing Falcon FG-X, beat van Gisbergen and the brand new ZB Commodore to the crown, their battle going down to the final round.

The title was effectively decided by a mistake from T8, a pitstop infringement stripping van Gisbergen of a Saturday win in Newcastle and putting McLaughlin in the box seat for the title.

"I feel like everyone needs to get into it a bit more, get amongst it between Shane and Triple Eight," said McLaughlin.

"They need to beat them, out-qualify them, undercut them – get out in front of them and then hold them back.

Van Gisbergen currently holds a 150-point lead over teammate Jamie Whincup, followed by Mostert (163 points behind) and Waters (170 points behind).

Anybody outside the Top 10 in the points is already a full round behind the runaway leader. 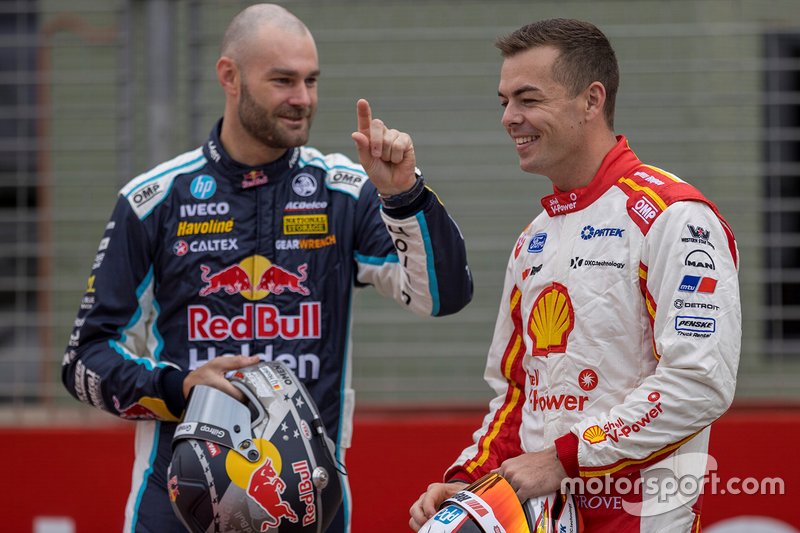