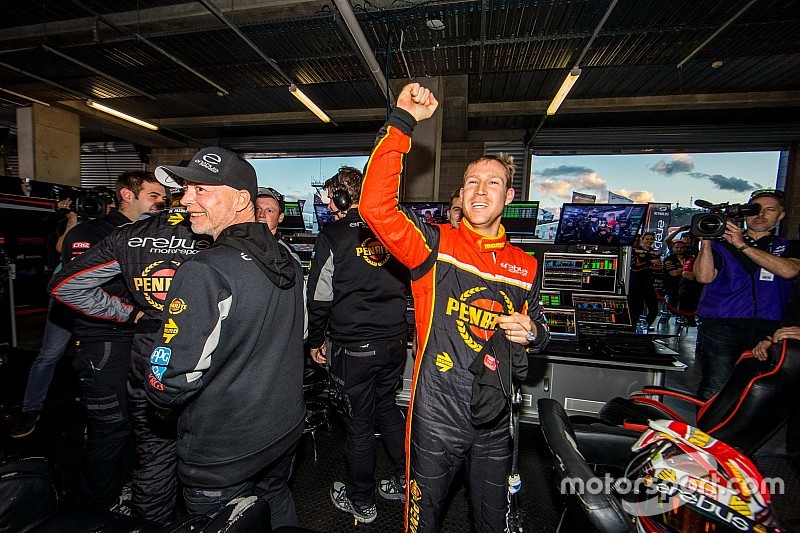 David Reynolds has labelled the Shootout lap that secured him a second career Bathurst 1000 pole position "a controlled explosion".

Reflecting on the lap that helped him pip Jamie Whincup for pole by just 0.009s, Reynolds reckons he went into the Top 10 Shootout running on very little sleep after an anxiety-riddled Friday night.

Adding to the pressure heading into the one-lap dash was a stunning effort from Reynolds' teammate Anton De Pasquale earlier in the Shootout, the rookie making a surprise play for pole on his Bathurst 1000 debut with a 2m04.349s.

With all that in mind, Reynolds says it was immensely satisfying to piece together a 'controlled explosion' to beat both De Pasquale and reigning series champ Whincup.

"I've been putting pressure on myself all day. I woke up this morning at 4am doing laps in my head, stressing out, had anxiety, everything.

"I didn't sleep well. I tried to sleep after lunch but couldn't get it done.

"I got in my car, pulled my socks up before I got it, tightened my belts... and just let it happen.

"It was controlled kamikaze, a controlled explosion. That's as fast as I can do. Every lap you do here it's not perfect, but you maximise what you've got. I think I did the best job I could."

De Pasquale, meanwhile, reckons the worst of his stress came after he'd got out of the car.

Having run second in the Shootout, he says it wasn't until he got back to the garage he started to realise he was in contention for pole.

"It's always difficult knowing when you're one of the first cars on track," he explained. "I didn't know what time Garth [Tander] did, I didn't know how the track would be, so I just went as quick as I could. And it was the fastest I've been all weekend.

"After a few guys went I started to realise it actually wasn't too bad a time, and I started getting really stressed. Everyone was around me telling me to smile, but I was nervous and stressed.

"Coming into the weekend I would have definitely taken that."

De Pasquale added that he didn't think his small excursion off track at the last corner cost him pole. Having been asked by Whincup post-session how much time he lost, he said: "I don't know, it wasn't enough to beat you."