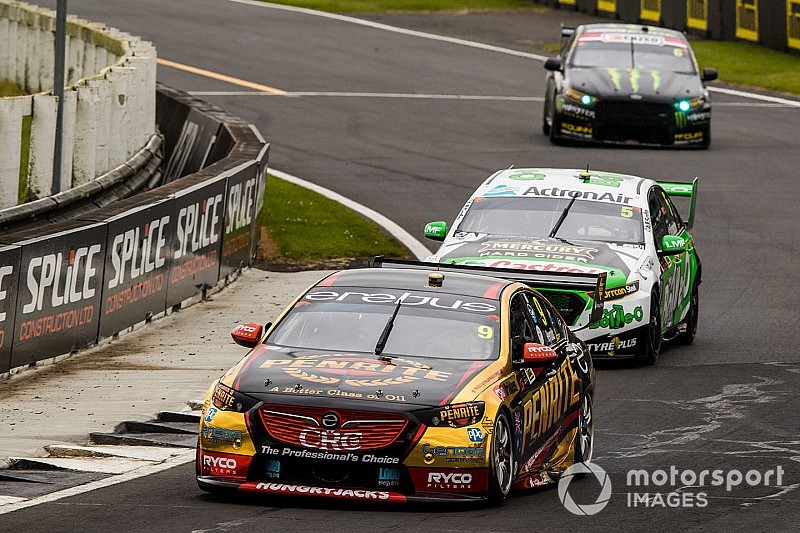 David Reynolds will run last in the Top 10 Shootout at Pukekohe after topping qualifying.

The Erebus driver won out in a late-session battle with title contenders Shane van Gisbergen and Scott McLaughlin, earning the right to run last in the single-lap Shootout that will determine the first 10 grid spots.

McLaughlin was the only man to break the 1m03s barrier on the first runs, going clear at the top with a 1m02.914s.

As the session neared its midway point Cam Waters took over top spot with a 1m02.875s, however the Tickford driver was quickly displaced first by McLaughlin's 1m02.858s and then Reynolds' 1m02.733s.

The session was briefly interrupted with nine minutes to go by Todd Hazelwood nudging the wall at Turn 4, Kiwis Fabian Coulthard and Richie Stanaway both jumping into the Top 10 straight after the restart.

With three minutes to go van Gisbergen made his play for first top, edging Reynolds by 0.01s wth a 1m02.719s. But the Erebus driver had an immediate answer, reclaiming top spot with a 1m02.644s next time round.

McLaughlin had one last go at knocking Reynolds off provisional pole right at the flag, but fell 0.02s short as he split the top two.

“We’re still such a new team that we’re learning heaps every time we go out,” said Reynolds.

“We learnt from each tyre set then, the car was improving. We weren’t going to go out [for a final run] but we wanted to try something for the Shootout and the race.

“I’ve got another set of tyres for the Shootout, but it’s going to be really hard, one-lap around here, to get the temperature into it.”

Jamie Whincup ended up fourth having been outside the Top 10 with three minutes to go, followed by Chaz Mostert and Coulthard.

Anton De Pasquale put together an impressive two-lap stint at the end to join teammate Reynolds in the 10, ahead of Tickford pair Stanaway and Cam Waters.

Andre Heimgartner secured the final spot in the Shootout, knocking Craig Lowndes down to 11th as he ensured all five Kiwis in the field will take part in the one-lap dash.