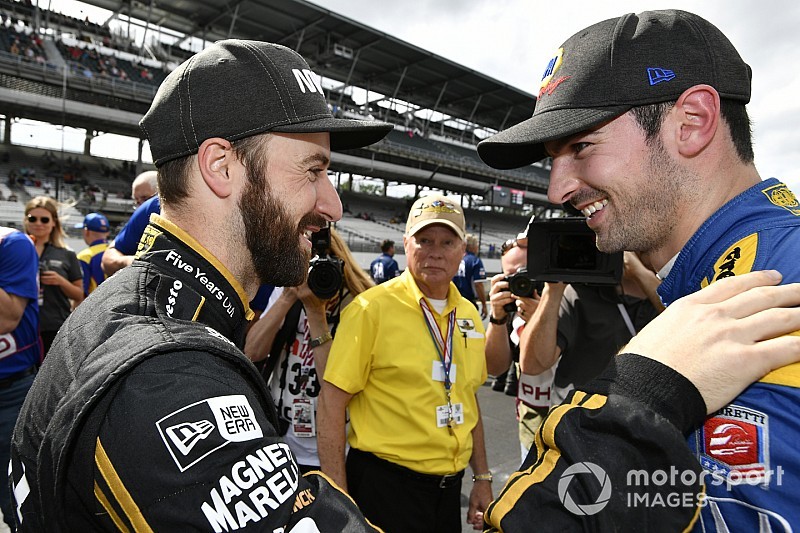 Having IndyCar stars Alexander Rossi and James Hinchcliffe compete in the Bathurst 1000 as wildcard entrants is a “big deal” for Supercars, according to Ryan Walkinshaw.

Rossi and Hinchcliffe will share a third Holden Commodore entered by Walkinshaw Andretti United in Supercars’ blue-riband event this October, the car carrying Rossi's #27 from his Andretti Autosport IndyCar.

It will mark Rossi’s Supercars debut and Hinchcliffe’s second appearance in the series following his 2012 Gold Coast 600 outing with Garry Rogers Motorsport.

“I can’t wait to see both Alexander and James behind the wheel of a Supercar,” said Walkinshaw. “It’s not only a big deal for our team, but the sport as a whole.

“To further enhance those links between us, Andretti Autosport and United Autosports, not only on the driving front, but with staff who can add to their experience, is a really fulfilling thing. It shows the strength and connection between our organisations.

“This program would not be possible without the support of Sean Seamer and the entire Supercars organisation. We must also thank Bill and U.S. Concrete, as well as Virgin Australia for their support in making this happen."

Rossi and Hinchcliffe’s one-off foray into Supercars has been made possible by Andretti, which fields Rossi in IndyCar and has previously run Hinchcliffe in the same series.

Michael Andretti said such cross-series wildcard appearances have been planned since the day his squad entered in a three-way alliance with Walkinshaw and United.

“Running a wildcard entry for the Bathurst 1000 has been a goal for us since the formation of Walkinshaw Andretti United," he said, "and I’m really looking forward to bringing some of Andretti Autosport to The Mountain.

“We have great talents both within Andretti Autosport and within the IndyCar Series. Alexander and James are both great fits within our team and will be natural teammates.

“I have no doubt that they will adapt quickly. It’s great to be able to bring this program to life and provide this opportunity for everyone involved."

Both Andretti and United Autosports will provide extra staff to support WAU's expansion to three cars for the 1000km enduro.

“It’s great to finally bring the wildcard to life,” said United Autosports chief Zak Brown. “We’ve spoken about it for a while now, so I’m really excited to see it in motion, and what a place to be able to make it happen.

“To have two drivers of Alexander and James’ calibre behind the wheel is fantastic, but also, to have some of our guys from United Autosports there at one of the biggest races in the world is extremely exciting."

What Hinchcliffe racing for Andretti means

Anyone who thinks that Arrow SPM's James Hinchcliffe racing for an Andretti co-owned car gives some indication of his intent in IndyCar for 2020, should also bear in mind that Brown – a principal in the soon-to-be merged Arrow McLaren Racing SP IndyCar team – is another co-owner of the Supercars team.

In addition, Hinchcliffe tweeted last Friday that he looked forward to “rekindling” a relationship with General Motors in 2020 – although he’s doing that a couple of months early by racing a WAU Holden! – which would appear to suggest he's staying with the merged McLaren/SPM squad which will become Chevrolet-powered in 2020.

That said, Motorsport.com sources continue to suggest that the Canadian star will not remain with Sam Schmidt and Ric Peterson, but will in fact move to another Honda squad with the blessing and partial funding of American Honda and Honda Canada.

Horner: Ocon "lucky to get away with a push" in Verstappen row