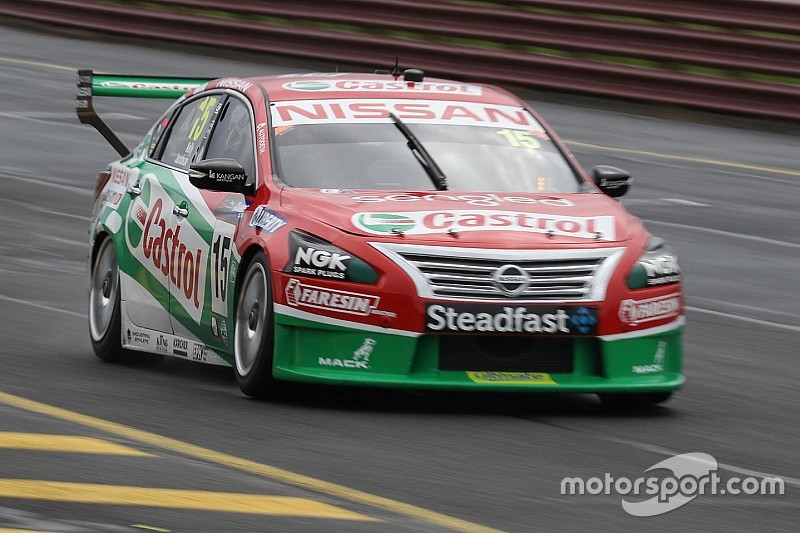 The 15-minute session got underway on a damp circuit thanks to overnight storms, offering a stark contract to yesterday's prime conditions.

James Golding the first to get caught out by the lack of grip with a spin on his out-lap, the GRM driver grazing the wall with the rear of his Commodore. That spelt the end of his session on the spot, the team opting to assess the damage rather than carry on.

Times initially languished in the 1m18s, before Shane van Gisbergen lowered the benchmark with a two-lap stint that started with a mid-1m17s and ended with a 1m16.623s before handing over to co-driver Earl Bamber.

Jamie Whincup was next to piece together a two-lap stint to go quickest with a 1m15.292s, at which point a number of drivers made the decision to gamble on slicks.

It was a gamble worth taking too, Garth Tander the first to see a pay-off with a 1m15.160s, followed by Rick Kelly's session-topping 1m14.344s right at the flag.

"You don’t learn a lot from a session like that as far as the car, but [it tells you] what lines you need to use in the wet and the change-over point from wets to slicks,” said Kelly.

“Yesterday wasn’t too bad, we had some tyre sets we thought would be okay and weren’t which dictated our position.

"We’ve got a couple of gremlins in the car we need to get on top of, normal Sandown stuff.

“But today will be about staying on top of the conditions and making sure you’re on the right tyre at the right time.”

Whincup's wet tyres time was good enough to be third quickest behind Kelly and Tander, followed by late improvers Nick Percat, James Courtney and Anton De Pasquale all on wets.

Michael Caruso, Todd Hazelwood and Richie Stanaway were next in line with times set on slicks, with Reynolds rounding out the Top 10 with that earlier time on the wet Dunlops.

Moffat to be inducted into Sport Australia Hall of Fame