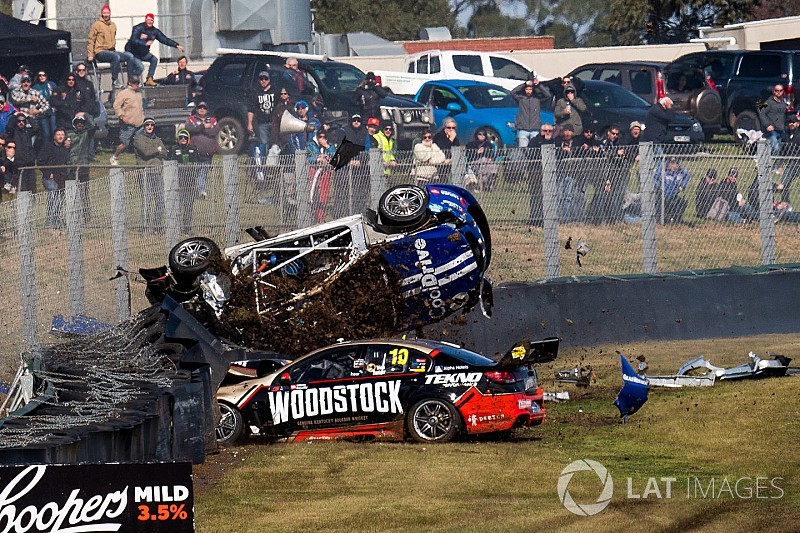 Luke Youlden was declared the winner of the co-driver qualifying race at Sandown, after the race was stopped a lap early due to a hair-raising crash between Todd Hazelwood and Jono Webb.

Youlden started the #9 Commodore from pole position thanks to David Reynolds’ exploits in qualifying, and effectively led lights-to-flag across the 20-lap opener.

He didn’t get to take the chequered flag, however, the race called a lap early after Webb and Hazelwood were involved in a frightening altercation over at Dandenong Road.

The pair were part of a scrap near the back end of the field when a small lock-up led to Webb tagging Hazelwood into a high-speed spin. The BJR Commodore slammed into the tyre wall, the roof and side panels peeling off as the car violently rolled along the wall.

Hazelwood seemed to emerge unharmed from the wreckage.

Alex Premat was classified second, although he had just lost that position before the red flag came out. Having shadowed Youlden for the entire race, Premat suddenly came under fire from Richie Stanaway with a lap to go. Stanaway slipped under the Penske Ford at Turn 1, but the one-lap count back for the red flag means Premat is classified as second with Stanaway third.

Dean Canto finished fourth behind teammate Stanaway, while Paul Dumbrell had a wild race on his way to fifth place. The #88 Red Bull Holden driver enjoyed a spirited battle with James Golding in the early stages of the race, twice short-cutting at high speed over Dandenong Road as he looked to pass the GRM Commodore.

The second time he made it stick, before sneaking past Tony D’Alberto and Steve Owen in less spectacular style as the race wore on.

Owen finished sixth ahead of D’Alberto, while Golding came home eighth ahead of Erebus driver Chris Pither, who made up an impressive nine spots.

Matt Campbell endured a horror start to his first race as a Triple Eight driver, dropping to the back of the field on the opening lap. The Supercup regular dropped a bunch of spots thanks to a sluggish start, before getting up on the kerb at Turn 4 and copping a whack from Taz Douglas behind him.

He got going again and made it to the finish, but Shane van Gisbergen will have a lot to do in the second race from 25th on the grid.