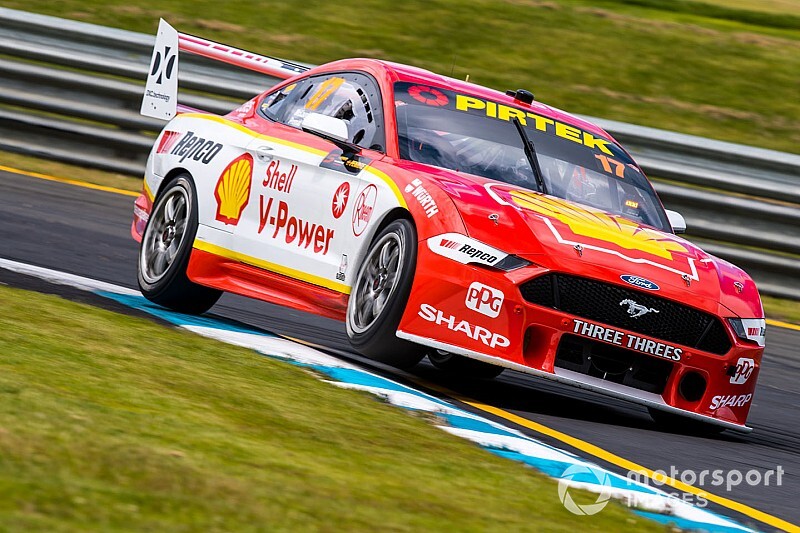 Despite light rain falling as the 20-minute session went green, it seemed that the early running was going to provide the best of the conditions.

That meant the pace was red hot from the get-go as everyone scrambled for a time, the Red Bull Holdens leading the way after the first runs, Jamie Whincup ahead of Shane van Gisbergen.

Increasing rain around the mid-point of the session made late improvement seem unlikely, Whincup even hopping out of the car early.

However the conditions changed quickly enough for a tiny window of dry running right at the flag, McLaughlin doing what he does best with a 1m07.773s to grab top spot after three sighter laps on the same set of tyres.

“I was just trying to circulate, watching the track dry the first three laps I was out there, trying to look after the tyre,” he said.

“Then the boys said ‘they’re going a bit faster, they’re doing eights now’. The track grip was semi-there, so I just had a big go.

“I was safe in the places I could spin out, like Turn 4 and a few other places, but once I got it going and hooked up around the back where it was a bit dryer, the thing was good.”

The Frenchman will be joined on the front row by Craig Lowndes, thanks to Whincup's earlier time hanging on for second spot.

But van Gisbergen and co-driver Garth Tander weren't so lucky, Tander being relegated to the second row by a last-minute lap from Andre Heimgartner.

Nissan teammate Garry Jacobson was the surprise of the session, giving Dean Fiore a third-row start with a stunning late effort.

Anton De Pasquale was next, followed by Chaz Mostert, David Reynolds, Will Davison and James Golding.