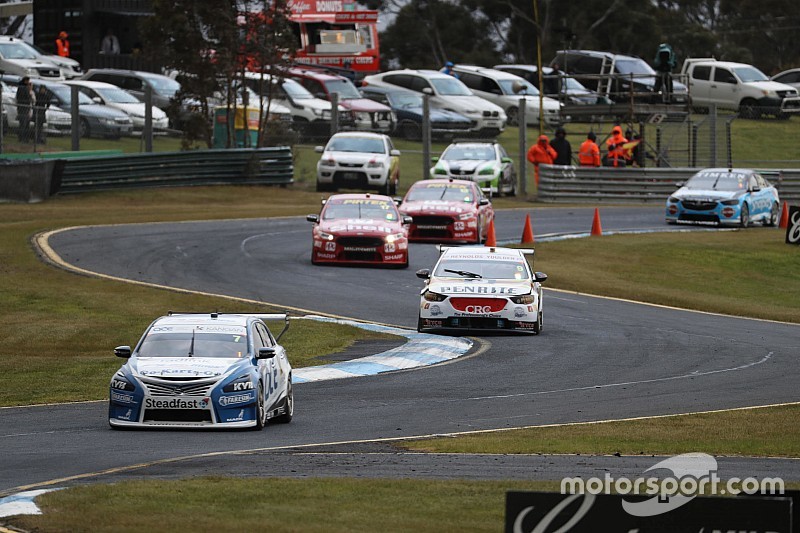 Nissan Motorsport's Aaren Russell was the surprise winner from a wild opening qualifying race for the Sandown 500.

Driving Andre Heimgartner's Altima, Russell was the big winner from a frantic 20-lap encounter that was shaped by a mid-race hail storm and the resulting strategic dilemma over switching to wet weather tyres.

However his good work was undone when Warren Luff and Jason Bright were caught out while squabbling for position at the back end of the order, Luff feeding Bright into the fence on the outside of the final corner to bring out the Safety Car.

The race got going again on Lap 9, but the excitement was far from over. Within seconds of the race going green the heavens opened, soaking part of the circuit through a combination of heavy rain and hail.

That led to a split in the pack between those that opted to grab wets and those that didn't. Dumbrell was among those to pit, which meant handing the lead over the Moffat.

Conditions quickly stabilised, which effectively handed the advantage to the likes of Moffat, Macauley Jones, Russell, and the two DJR Team Penske cars – both of which were outside the Top 10 at the restart.

On Lap 12 there was another significant shift at the front, with Moffat, Jones, and Russell all getting together at Turn 4. It started with Moffat balking on his way through Turn 3, the concertina effect meaning the two cars behind him them pushed him wide at Turn 4.

As the car in the back of Moffat Jones was hindered as well, while Russell swept into the lead.

Once in front, the Nissan driver held his nerve through the difficult conditions to secure a 0.9s win over reinging Bathurst winner Luke Youlden.

“The rain threw everything at us. I was so nervous I the car when it was wet down one end and dry at the other,” he said.

“I kind of got lucky and got to the lead and just pushed on, our car was so good then actually.

“I’d get a gap on Luke and then the lapped cars would ruin everything… that was tough. But I’m just pumped for everyone in the whole organisation.

Alex Premat came home third in the #17 Penske Ford, a remarkable turnaround given the Frenchman started back in 14th. He was followed home by Tony D'Alberto in the sister Ford, while Jones was dumped back to fifth by that run-in with Moffat.

The Tickford driver fared even worse, coming home 10th after reversing out of the Turn 4 wall.

"There’s not much you can do when you get drilled from behind," he said.

"I felt the first hit from Macauley and that was fine, but it sounds like he’s been drilled from behind.

"Aaren Russell was probably pretty keen to get things moving and doesn’t realise you can’t just drive into the back of people, you’ve got to drive to the conditions sometimes.

"He’s young and eager and you learn those things along the way.

"We were able to recover back to 10th, so not the end of the world, but disappointing to give up that track position, that’s for sure."

The best of the cars to have made the wrong decision to pit for wets was Dumbrell, who was just 11th. His track position also had an effect on the sister Red Bull Holden, Earl Bamber forced to double stack behind Dumbrell.

He couldn't manage any better than 16th in the points-leading car, giving Shane van Gisbergen plenty to do in the second qualifying race.

This afternoon's race for primary drivers will determine the starting grid for tomorrow's Sandown 500.