Jamie Whincup topped the second Supercars practice session ahead of the Sandown 500, while Chaz Mostert's day was cut short by a session-ending shunt. 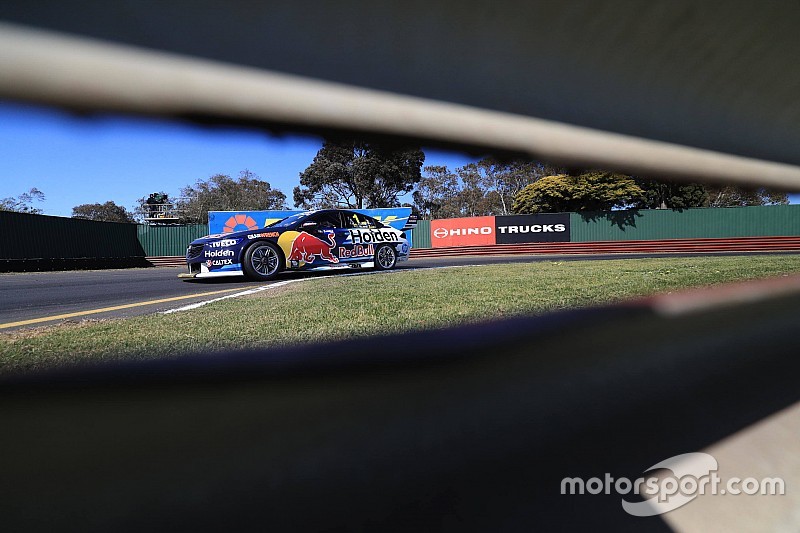 After co-driver Paul Dumbrell obliterated the field in this morning's co-driver session, Whincup was back in control as the primary drivers joined the fun for the second 30-minute hit-out of the day.

The reigning series champ was on top the whole way through, first going quickest with a 1m08.112s. He then shifted the benchmark down to a 1m08.089s with 10 minutes to go, before settling on a 1m07.968s on his final run.

That time was good enough to edge out teammate Shane van Gisbergen by 0.09s, despite being fractionally slow than Dumbrell went in the earlier session.

While happy to be quickest, Whincup was left perplexed by the patchwork condition of the re-worked Sandown surface.

"It’s sort of frustrating that they decided to fill the gaps in the track the day before the biggest race of the year here," said Whincup.

"Do it two or three days or a week and we don’t have an issue with rubber flying everywhere. But it’s the same for everyone, we tune to the conditions.

“But we cracked on, the car’s good, and we got through what we wanted to.”

Van Gisbergen's time came late in the session, the Kiwi piecing together a two-lap stint in the closing minutes that saw him go third quickest and then second quickest on consecutive laps.

James Courtney was third thanks to a late improvement of his own, the Walkinshaw driver impressed with the feedback he's getting from his Holden.

"All in all, we’d been talking about a numbness in the car all year, and we went to The Bend and I could feel it hooking up and loading, and all that is still there," said the 2010 champ.

“It makes the job so much easier when you can feel that. It makes the changes a lot easier to make, pin-pointing the areas where you need that speed.”

Garth Tander was fourth, while Craig Lowndes – who was second quickest with five minutes to go – was shuffled back to fifth.

Mostert finished up ninth, despite only taking part in half of the session. The Tickford driver had been sitting second early on, before backing his Falcon onto the entry kerb and then into the wall at Turn 4.

"It’s pretty filthy offline for some weird reason,” he said.

“I got a bit wide on that kerb, we used it all last year in the race, but it’s very dirty and slid out underneath me and I couldn’t save it quick enough.”

The main drivers are now finished for the day, with this afternoon's sole remaining practice session only for co-drivers. The primary drivers will return for the 15-minute all-in practice session tomorrow morning.